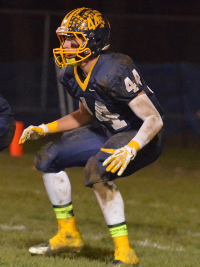 Jacob Boyd returned the opening kickoff 29 yards then ran 49 yards for a touchdown on Kirtland’s first offensive play at Cuyahoga Heights on Friday. That was just a taste of what Boyd had in store for the Redskins.

Boyd carried the ball 11 times for 224 yards and four touchdowns in the Hornets’ 50-21 win. It was Kirtland’s fifth straight win over the Redskins and their seventh in eight years.

“He really got us going,” said Kirtland head coach Tiger LaVerde, who guided the Hornets to their 50th straight regular season win. “His first carry of the game he popped it for a touchdown. He has great speed and he’s a big kid too, he’s 190 pounds. They didn’t really have an answer for him tonight.”

After stuffing the Redskins on fourth-and-1 at the Kirtland 44, Boyd ran for a 42-yard touchdown on the Hornets’ third play of the drive to make it 14-0.

The Redskins got on the board late in the first quarter when Bret Lowther threw a 19 yard touchdown pass to Craig McDaniel to cut Kirtland’s lead to 14-7.

Kirtland responded with another Boyd touchdown run, this one from the four. Sam Skiljan later threw a 22-yard touchdown pass to Matthew Finkler to push the lead to 28-7 with 6:35 left in the first half.

A Redskins touchdown with just over a minute left in the half kept the game within two scores but Skiljan broke a 66 yard touchdown run on the first play of Kirtland’s next position and Boyd added a two-point conversion run to put the Hornets on top at the half, 38-14.

Cuyahoga Heights opened the second half with a 43 yard kickoff return and a four-play, 43-yard touchdown drive capped by another Lowther to McDaniel touchdown pass then recovered a Kirtland fumble at the Hornets’ 44.

The Hornets’ defense made a goal line stand and took over possession of the ball at its own 4.

“Defensively, we’ve looked better,” LaVerde said. “(Cuyahoga Heights) executed well and got a few fourth down passes to keep drives going and ended up punching it in. If they punch it in there it’s a one touchdown game. We held them when we had too even though our defense was on the field for a long time tonight.”

Skiljan finished the game with seven carries for 153 yards and Adam Hess carried 17 times for 126 yards in leading the Hornets to 503 rushing yards.

“They kind of bottled up Adam a little bit tonight,” LaVerde said. “But, Sam had 153 and Jacob had the big night. The guys up front did a nice job. Matthew Finkler caught a TD pass too. We have some great skill guys and they did a great job tonight.”