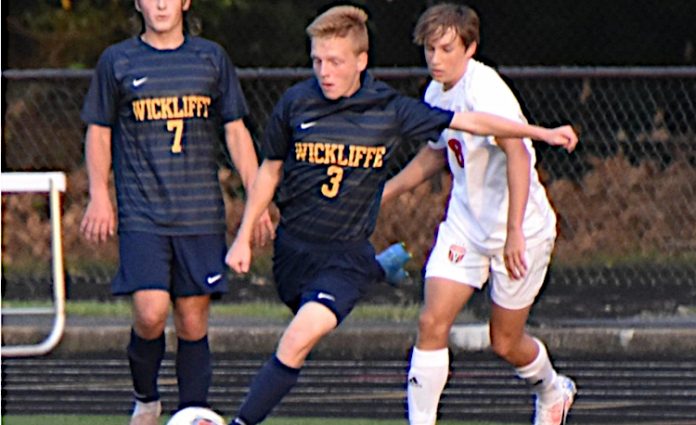 Wickliffe has some big shoes to fill this fall but the Blue Devils certainly aren’t lacking in experience.

Among the team’s nine returning starters and seven others with varsity experience are 17 seniors including 13 in their fourth year on the squad.

“We have probably the most experienced team in the conference with five or six players that have been starters for three years,” said Wickliffe coach Dom Severino. “We are excited to once again play a tough schedule with a senior-led team.”

“Losing Gabe Stoehr in goal and Bryant Murphy at center back are two huge holes to fill,” Severino said. “Both were centerpieces in the back. Anthony Shaw is raw and looking to fill Gabe’s shoes in the back and we are excited to see what he can do at the varsity level.”

While Shaw will be thrown right into the fire this season, he’ll have a solid defender in front of him to lead the defensive line in senior A.J. Levon, who earned honorable mention All-CVC and second-team All-Greater Cleveland honors as a junior.

“A.J. is another guy that I can lean on anywhere on the field,” Severino said. “He was a large part in the back last year and will do a whole lot of everything. He is a big athletic body that will be used in both boxes.”

Wickliffe’s defense also will get help from its potent offense led by senior forward Shane Williams, who scored 10 goals last season on the way to earning second-team All-CVC and All-Greater Cleveland honors.

“Shane has worn the ‘Golden Boot’ since his sophomore year,” Severino said. “He has led our team in goals scored and we will look at him once again this year as a focal point in our attack.”

Opposing teams that focus on Williams will leave a crack in their defense for Wickliffe’s other dangerous attackers in senior midfielders Colin Casey and Brady Pugh.

“Colin is the centerpiece for everything we do in the offensive third,” Severino said. “The strides he has taken the last couple of years in the offseason have begun to show. I believe he would hold his own with any area side.”

Pugh, a second-team all-conference and All-Greater Cleveland selection, scored six goals and assisted on four others.

“Brady is our utility workhorse on the team,” Severino said. “I can put him anywhere any time. He will continue to set the bar for work rate during the game.”

Expectations are high on Rockefeller Road and for good reason.

Wickliffe returns as one of the most experienced, talented, and deep rosters in the league and area.

“With the experience we have, the talent is there,” Severino said. “We have speed and athleticism all over the field. Can we put it to a purposeful use for 80 minutes is the question.”

The Blue Devils will be tested early and often as Severino has put together a challenging schedule that includes many larger schools and top Division III programs.

“Year in and year out we schedule large, successful area schools to prepare us for a strong district with some of the top Division III schools around,” Severino said. “We are ready to take that next step and join that race.”