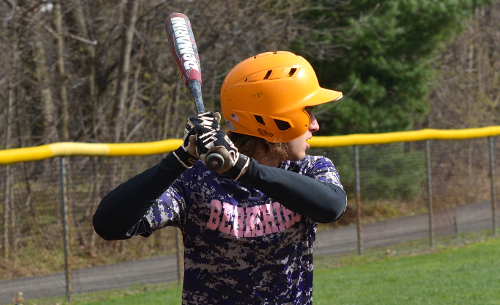 Berkshire’s Luke Byler and Connor Dudinsky both went 3-for-4 at the plate to lead the Badgers to a 9-0 win at Harvey on Monday. The win kept the Badgers in the hunt for a share of the Chagrin Valley Conference Valley Division title.

The Badgers, who improved to 10-8 overall and 5-1 in league play, have to beat both Harvey and Fairport at home to share the CVC crown with Kirtland.

“I told the guys after the last game we played, it’s not about individual stats,” said Berkshire coach Steve Smetana. “It’s about doing what’s best for the team and coming out with the ‘W’ after each game. We’re getting close to tournament time and that’s what matters.”

Berkshire took a 1-0 lead in the top of the first and added single runs in the fourth and fifth innings before blowing it open with four in the sixth and two more in the seventh.

“We were sluggish at the beginning,” Smetana said. “It was a rough go of it offensively. We had a tough time waiting back on their pitcher.”

Byler and Dudinsky got things going for the Badgers.

Dudinsky, the leadoff hitter, had a double, two runs batted in and scored three times while Byler, the No. 9 hitter, knocked in a pair of runs and scored once.

Sam Fisher kicked things off in the fourth when he singled and scored and also played a big role in the Badgers’ fifth inning outburst.

“He did what we needed him to do with his speed,” Smetana said.

Fisher was 1-for-2 with a walk and two runs scored.

Jarett Smetana pitched the first three innings of the game to pick up the win for the Badgers. He didn’t allow a hit and struck out four. Will Blechschmid pitched the fourth and fifth innings and Mitch Freeman closed it out.