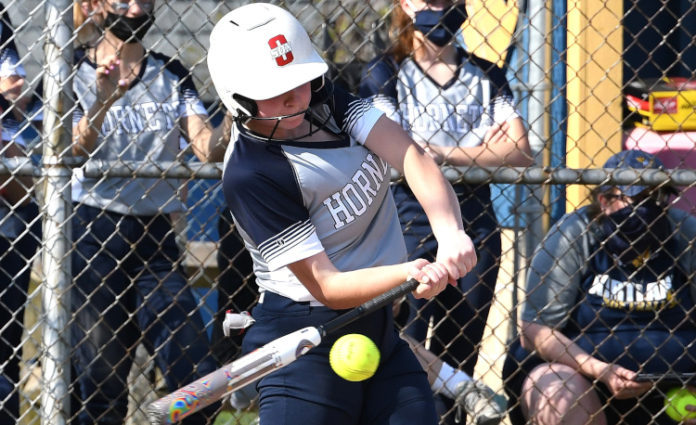 Gianna Cantini did it all for Kirtland in a 13-0 five-inning win over visiting Cardinal on Monday.

Cantini was 3-for-3 at the plate with two runs scored, five runs batted in, and a home run, and she also pitched a five-inning no-hitter with eight strikeouts in the win.

“I love hitting home runs. It’s such an amazing feeling to crush the ball with a bat,” Cantini said. “I’ve never thrown a no-hitter before, so this is special to me because I could share it with my shortstop Gianna DiFranco. She’s our glue.”

After issuing three walks in the top of the first and dealing with back-to-back fielding errors in the second, Cantini pitched out of both jams and retired 11 of the next 12 batters she faced.

“When it comes to pitching, for me, it’s all about hitting my spots and controlling my pitches,” Cantini said. “Plus, the defense behind me was really solid today. My catcher, (Madison) Matijevic, was phenomenal behind the plate tonight. She’s my rock.”

Kirtland scored five runs in the bottom of the first on just one hit but the Hornets drew four walks and had two batters hit by a pitch.

Cantini hit a solo shot with two outs in the second. The four-bagger was her fourth of the season.

“I saw a nice fastball down the middle,” she said. “I approached the at-bat with the mindset to sit back on the pitch and drive the ball. I may have already mentioned this, but I love hitting home runs.”

Chloe Ungrady, who was 1-for-2 in the game, also had an RBI hit in the inning.

The Hornets scored three runs in each of the third and fourth innings to invoke the run rule.