OhioVarsity.comThe best play here!
More
HomeCardinal back to .500 with win at Fairport 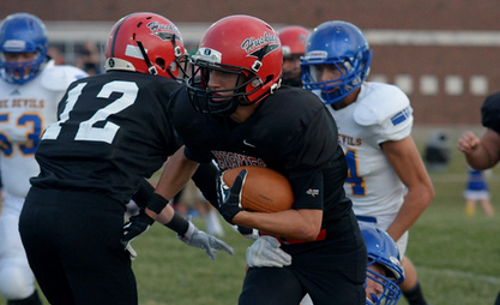 Cardinal back to .500 with win at Fairport

Cardinal’s revolving door of injured and healthy players continued on Friday but the Huskies managed to pull out a 36-13 win at Fairport Harding.

Kyle Simms picked up where Nate Peters, who was out with an illness, left off. Simms rushed for 180 yards and three touchdowns and Jimmy Wilcox pitched in with 107 yards on 15 carries with two scores.

“We could have been sharper just in our execution, but we got the job done,” said Cardinal coach Eric Cardinal. “It was not as sharp or as clean of a game as I want to see but at the same time we got three or four guys that got their first meaningful time and still got a ‘W.’ Anytime you can get some guys playing time like that and get a ‘W’ you have to be happy.”

With Peters out, Simms and Wilcox led the Huskies to 335 rushing yards on 41 carries. The Huskies had three big running plays negated by penalty.

“Kyle Simms had a nice game and we had a couple of plays that were negated from three wide receiver holds. We lost another 100 yards or so on kind of meaningless penalties,” Cardinal said. “Wilcox was the victim of another 20-25 yards on a penalty. He played very well on offense for us and was quick to the hole. He went from being a part-time guy two days ago to a guy that I don’t think came off the field.”

Last week, Wilcox had a big rushing day in the JV game. That carried over into Friday night’s varsity contest.

“It’s a different deal than playing that much on a Saturday morning,” Cardinal said. “Two days ago he was hoping he was going to run the fullback pitch on Saturday morning after having like 150 yards against Cuyahoga Heights last week. Then he came out and ran for 100 in the varsity game. You have to be happy with a guy like that.”

After forcing a Fairport Harding turnover on the Skippers’ second play from scrimmage, Wilcox broke free for a 52-yard touchdown run with 11:25 left to play in the opening quarter. Simms scored on a 30-yard run four minutes later to make it 12-0.

The Skippers returned the ensuing kickoff for a touchdown but the Huskies ended the first quarter with a safety to make it 14-6.

Simms scored on a 19-yard run and Wilcox added a 3-yard score in the second quarter to give Cardinal a 30-6 lead at the half. Simms made it 36-6 with his 27-yard run in the third quarter and Fairport closed out the scoring with a 24-yard touchdown pass in the fourth.

The Huskies, who improved to 3-3 overall and 1-2 in the Chagrin Valley Conference, host Kirtland on Friday.

“What we have to do is get these other guys back so we can have everybody back at the same time rather than have this revolving door,” Cardinal said. “We have a big one this week to get ready for. We have to roll up our sleeves and get back to work.”