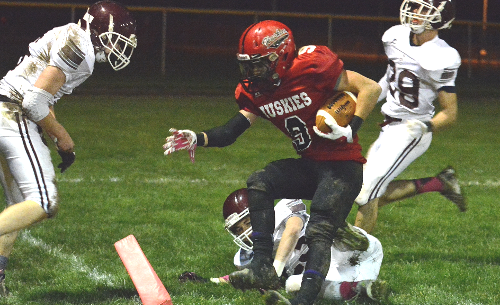 The king and his varsity court then went out and scored on every first half offensive possession to beat the Skippers, 55-13.

“We couldn’t do anything wrong in the first half,” said Cardinal coach Eric Cardinal. “Obviously we’re pleased. I told these guys to enjoy the heck out of your Homecoming weekend and have a good time at the dance tomorrow night and all those things, but you better get back to school on Monday ready to practice some football. We’ve got two big games coming up and we’ll take them one at a time.”

Cress led the Huskies with 60 rushing yards on just three carries, scored on a 25-yard run that made it 28-0 in the first quarter and picked off two passes, returning one 45 yards for another score.

“He had an outstanding game on both sides of the ball,” Cardinal said.

Clark Thurling returned the opening kickoff 80 yards for a touchdown and the Huskies poured it on from there.

They forced punts on Fairport’s first three drives and answered with touchdowns. Quarterback Kyle Simms threw a 10-yard touchdown pass to Bobby Mrosko and Chris Guinn followed that with a10-yard scoring run. Cress then broke his touchdown run to make it 28-0.

A Cress interception at the Cardinal 19 stopped Fairport’s longest drive of the first half.

Simms turned that takeaway into a touchdown when he hit Brant Zemelka on the left sideline for a 22-yard score and Noah Farmwald recorded a sack in the end zone for two more Husky points that made it 37-0 with 8:21 left in the first half.

Nate Peters ran for an 18-yard score and Cress ended Fairport’s next drive with his pick-six. A fumble recovery set up Cody Purpura’s 7-yard touchdown run that made it 55-0 with four minutes left in the half.

“I thought we played a clean first half,” Cardinal said. “We got guys in and out and we had some guys making cameo appearances. Obviously Fairport is a little young. I thought they played hard and well, as it showed in the second half when they had a chance to get a couple touchdowns. They’ve been working hard all year too and got a couple of scores and that’s alright. We got to play our roster and that’s something we were hoping we’d be able to do.”

Simms completed both of his pass attempts for 32 yards and two scores.

In addition to Cress, 13 other Cardinal players recorded at least one carry with Purpura, Guinn and Jimmy Wilcox tying for the team lead with four carries each. The Huskies rushed for 274 yards on 30 carries.

“One of the things about a game like this, there’s two sides of the coin, we played everybody and that’s what we wanted to do but yet we didn’t have much continuity,” Cardinal said. “One of our guys got in and ran the ball for about 25 yards and I believe that was his only carry or maybe he had two carries. There is no continuity there. You get into a game where it’s a pound it game and you have guys that haven’t played a whole lot. That’s sometimes a nice problem to have. We just have to work on the continuity for next week.”

Lester Troyer carried the ball just once for 30 yards but he led the defense with 5 ½ tackles, four tackles for loss and three sacks.

Vinnie Curtis ran for a 9-yard touchdown on Fairport’s first offensive possession of the second half and Nathan Bagin scored on a 15-yard run to close out the scoring.

With the win, the Huskies improved to 6-2 overall and remain in the hunt for one of the eight playoff spots in Division V, Region 15.

Coach Cardinal doesn’t waste much time predicting how many Harbin points his Huskies will need to play in Week 11 for just the second time in school history. Instead, he focuses on Cardinal’s next opponent.