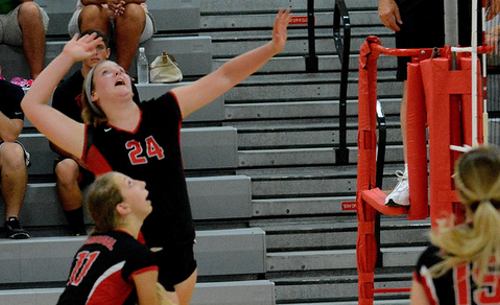 “The girls came out ready to play,” said Cardinal coach Karsica Chambers. “When we got up to the school they were in a great mood. I could just tell that they seemed different today. Everyone had a smile on their face and they showed up ready to play. Even during the game they were having so much fun. This was the first time all season that I saw all of them collectively as a team not only playing together and working as a team, which they did, but they were having fun. That was nice to see.”

As always, the Huskies stuffed the stat sheet.

“She has been so consistent this season,” Chambers said. “What’s nice about her is she comes out determined. Tonight, they put up a block and she hit around the block or through the block. Most of the time that she went up it was either a kill or a hard hit that threw their defense off and they ended up throwing up a free ball to us. She was on tonight.”

“I made a change in the lineup and she plays right side now instead of in the middle and she had three blocks herself, which is really nice, “Chambers said. “She seems to move better on the right side. She also played really good defense with three digs. She comes out a lot of the time, she only plays front row, so that was good. She played really good tonight.”

The Huskies return to action on Saturday when they travel to Chagrin Falls for a tournament. They open the event against Hathaway Brown and a victory could set up a non-conference rematch with rival Berkshire, who plays Woodridge in the first round.