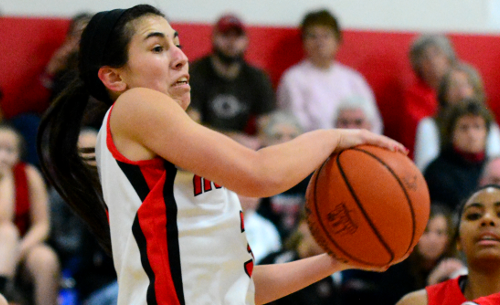 Cardinal was eager to shake off a double-digit loss at rival Berkshire back on Jan. 27.

The Huskies played much better in the rematch of the Chagrin Valley Conference Valley Division rivals on Saturday but came up on the losing end of a 29-28 classic.

“It was a special kind of game,” said Cardinal coach Luke Kruse. “It was back and forth the entire way. The whole time we knew it would come down to a possession or two. Even though we lost it was probably the most competitive game I’ve ever coached or been a part of. It was a real neat atmosphere with the rivalry and the crowd was into it. It was a great high school basketball game but unfortunately for us they made a really huge shot at the end.”

That shot, a short jumper by Berkshire’s Alexis Johnson, tied the game and Johnson added a free throw to put the Badgers on top with just over 20 seconds left to play.

The Huskies got off a shot but couldn’t convert the game winner.

“We had a chance to go and we got a really good look at the basket but it didn’t go in,” Kruse said. “It was a real tough ending but I was really happy with the way we played especially since the first time we played them we just didn’t play anywhere near our best. We were close to our best (on Saturday). We maybe tensed up in the fourth quarter and missed some shots that we could have made because of the pressure. Other than that I was really proud of the effort and composure and the improvement that the girls showed from the first time we played them.”

That balanced effort allowed the Huskies to take a 25-24 lead into the fourth quarter.

“It was a real good team effort,” Kruse said. “That was probably the best game we played all year even though it was a loss. We really executed the game plan perfectly. We threw a little bit of a new look at a halfcourt trap on Berkshire this time and that definitely stymied them for about a quarter, which helped us out. All seven of them that played really contributed and kept us in the game. If it wasn’t for their effort overall we wouldn’t have been in the game.”

The Huskies will honor their seniors in a home game against Conneaut on Thursday then travel to Woodridge on Saturday. They’ll close out the regular season the following Wednesday against Wickliffe.

“It’s a tough one to pick ourselves up from,” Kruse said. “We’ve got a few chances left and if we play with the composure and the effort that we played with against Berkshire we’ll hopefully be able to finish the season on a positive note.”