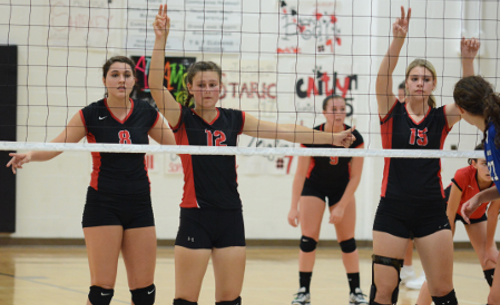 Throw away the records anytime Berkshire and Cardinal get together on the court. The heated neighborhood rivalry always brings out the best in both teams and Tuesday’s Chagrin Valley Conference Valley Division contest was no different.

Cardinal overcame a first set loss to defeat the host Badgers, 3-1, to improve to 6-5 overall. Berkshire dropped to 5-1.

“It was nice to pull it out,” said Cardinal coach Lisa Shirkey. “Their crowds are always interesting and they have a big student section. They had their pep band there. The gym was hot and it gets loud.”

The revved up Badgers took the first set, 25-22, which amped up the crowd even more.

“Berkshire came out ready to play,” Shirkey said. “I think that set us back and we lost the first set. We didn’t play our game and didn’t stick to the game plan we had going in. I knew if we did that we’d be fine and I wasn’t worried, but we got away from that on defense the whole first set.”

The Huskies responded with a 25-15 win in the second set to even the match at a game apiece.

“I was never worried about us pulling that one out,” Shirkey said. “We needed to run a quicker offense and once we started doing that we were able to pick them apart.”

Cardinal finished off the Badgers with a 25-16 win in the fourth set.

“We came back and won and that’s where I think we’re showing our veteran status,” Shirkey said. “We have a little more mental toughness than in years past. We’ve just got to play our game. We have the personnel to do it.”

“Maddie Bean had an awesome game,” Shirkey said. “She had a great game setting-wise and she had some nice attacks as far as setter dumps. Megan Zeigler played really well at libero and had some strong service. She was pretty solid tonight.

“Alyssa played a solid game and we always have Kaitlin Bean we can go to. That’s what’s nice. We have so many players that stand out.”

The Huskies host Kirtland on Thursday in another key CVC Valley Division match.