OhioVarsity.comThe best play here!
More
HomeCardinal gives Harvey all it can handle but comes up short in... 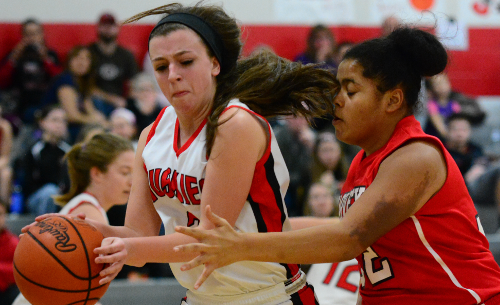 MIDDLEFIELD–It wasn’t exactly David vs. Goliath but Harvey entered Saturday night’s game at Cardinal undefeated in league play and atop the Chagrin Valley Conference Valley Division standings while the host Huskies are winless in league play.

The Huskies led, 10-2, after the first quarter but the Red Raiders responded with a dominant second to take a 23-12 lead into the break and held off the Huskies in the second half to win 50-33.

“The second quarter, that’s a huge hole to find yourself in especially after coming after such a great start,” said Cardinal coach Luke Kruse. “Instead of building on it they came out with a little more intensity and we got a little shell-shocked and let their size kind of throw us around a little bit. We didn’t do a very good job of denying them in the low post. They ate us up down there and got a lot of put backs and second chances down there.”

Harvey’s Makenna Lilly scored six of her game-high 15 points in the second quarter as she dominated on the offensive and defensive glass. Cardinal couldn’t combat her size advantage and that led to several put backs and easier shots.

Meanwhile, after the first quarter the Huskies found it difficult to get off a shot from inside the paint.

“We had a tough time attacking the way we like to attack,” Kruse said. “If we would just pump fake when we go to the basket instead of just trying to throw the shot up because when you play a decent team like that they don’t come down and foul while we’re going up. We’ve got to get a little more creative on our shots and try and draw the foul. Just going in there and chucking it up and hoping for the foul isn’t going to get it done and it didn’t get it done. We’re going to work on that in practice and the main thing now is to just look ahead at Berkshire on Tuesday. Hopefully we’ll learn some lessons from this game and use it the rest of the way.”

Jess Koches led the Huskies with 11 points and Emily Kruse and Haley Adams both chipped in with six.

After watching his team play toe-to-toe with the Valley Division’s best team Kruse knows the Huskies had a shot to pull off the upset. But, he’s not happy with moral victories.

“I wanted to win tonight,” he said. “That’s the bottom line. I thought we had the game plan. I thought we had the effort. We just got a little bit rattled in the second quarter and played kind of on the edge of freaking out or on the edge of throwing the ball away pretty much on offense the rest of the way out. We never really regained that composure that I saw from the girls in the first quarter and that’s the kind of composure that we needed to beat a good team like Harvey.”

Cardinal travels to rival Berkshire on Tuesday, hosts Beaumont on Wednesday then closes out the week with a league game at Kirtland on Saturday.