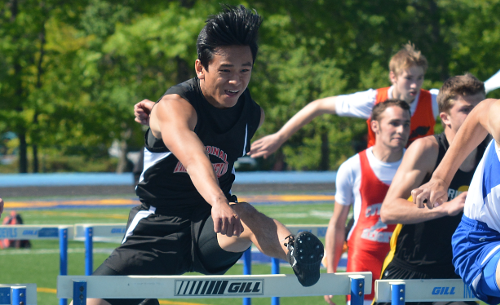 INDEPENDENCE—Cardinal’s Brandon Wicks and Erin Ross both placed among the top four in three individual events at the 2015 Division III District Track Meet at Stan Skoczen Stadium on Friday to advance to next week’s regional meet in Navarre.

It’s absolutely amazing,” Wicks said. “It’s a great feeling for me. It’s something I set out to accomplish is to make it out 3-for-3 today and I exceeded expectations.”

His time in the 110 hurdles set a new Cardinal High School record and he narrowly missed a second school mark in the 300 hurdles.

“I’m so blessed to break a school record today in the 110’s and I was so close to breaking another school record in the 300 hurdles, being 9/100th of a second off,” Wicks said. “I’m happy and I’m ready for the next meet. I’m going to take one meet at a time.”

Ross finished fourth in both the 100 and 300-meter hurdles. She ran a time of 17.23 in the 100 meter hurdles and finished the 300 in 50.21 seconds. She also was part of the Huskies’ 4×400-meter relay team that advanced to regionals with a fourth place finish in 4:18.49. That group also consisted of Ashley Lucarelli, Emily Kruse and Caitlyn Lechene.

For Ross, each event resulted in a new personal best time.

“It feels awesome,” she said. “I PR’d in everything today so I just had a really good day. I’m really thankful that I was able to pull through.”

Last season, Ross failed to reach her goal of advancing to the regional meet. She wasn’t going to allow that to happen again.

“Last year I never made it past finals and my goal this year was to make it to regionals,” she said. “I just wanted to push myself and I did it.”

Peters began his throwing career averaging about 41 feet per toss. He dipped into the high 30s then changed his throwing strategy.

“I started picking it up by spinning,” Peters said. “It’s a lot more complicated than the glide but it’s helped me push a lot more. With gliding I’d stop and for spinning I can push up off my right leg a lot more for a couple more feet.”

That strategy paid off in Wednesday’s shot put finals when Peters knew he had to beat his own average to advance.

“I saw that the one kid had 44-5 and I knew I had to beat him so I just pushed it out there with everything I had and I ended up getting him,” he said. “I’m pretty excited about it.”

Independence’s Tyler Polman and Ben Artrip, as well as the boys’ 4×800-meter relay team, also will head to regionals.

Artrip tied for fourth then won a jump off with Bristol’s Nate Novicki.

“It was fun,” Artrip said. “It was a little disappointing to do so poorly to begin but it was nice to make it in the end.”

Novicki and Artrip began their jump off at 5-8 with neither athlete successfully clearing the height until it had dropped to 5-5. Both then cleared 5-6 and Artrip won the tie-breaker with a successful jump at 5-7.

“I felt just kind of like I should have done better but I was just happy that I made it in the end,” Artrip said. “It was very frustrating. I was having such a terrible day. I couldn’t find my steps and then I got a little nervous toward the end and then I found them and did fine again.”

Kirtland’s Will Armstrong also punched his ticket to regionals with a third place finish in the pole vault. Armstrong cleared 12 feet on Wednesday.

Chaz McPeak, Alex Weaver, Dylan Aquila and Antonio Rini combined to finish eighth in the 4×1 (50.37) and Rini, Peter Gabor, Johnathon Guenther and McPeak ran a time of 1:42.28 to finish seventh in the 4×2.