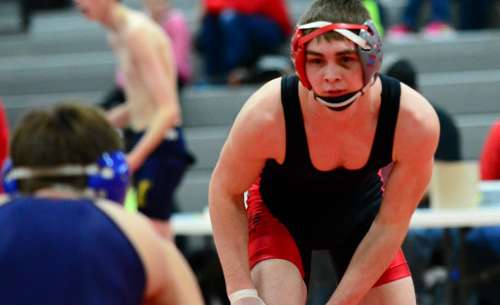 The Chagrin Valley Conference Wrestling Tournament is among the most difficult of league wrestling events in the state of Ohio. Annually, the CVC is filled with returning state placers, qualifiers and up and coming wrestlers.

Cardinal turned in a strong performance on Friday then suffered a few setbacks on Saturday to finish with five placewinners and in ninth place overall and fourth in the Valley Division.

“It’s a tough tournament,” said Cardinal coach Jeff Zeigler. “The competition there gets good real quick. We had everybody still alive coming back Saturday, which was nice that everybody was still in the tournament, then that first round we ran into some buzz saws. We’re just not at that level yet with some of our wrestlers.”

Mast earned a first round bye then pinned his quarterfinals opponent and beat Hawken’s Michael Miller, 8-5, in the semifinals.

“He wrestled really well,” Zeigler said. “Whitelaw is good. We scored a couple points on him but he’s a real hard kid to score on. Ian didn’t wrestle badly but he still could be more aggressive. Against the good kids I think he reserves a bit. I don’t think he opens up. He wrestles more not to lose than to win. He wrestled strong all day. Miller from Hawken is another tough kid and Ian wrestled him strong. I was pleased.”

Mast earned back-to-back byes to advance to the 113 pound semifinals, where he lost to eventual tournament champion Noah Georgian of Kenston, 3-2. He rebounded with a pin of Independence’s Luke Swauger in the consolations semis and a 17-1 technical fall of West Geauga’s Tyler Stennet in the third place bout.

It was the semifinals match against Georgian that Mast would like to have back.

“We gave him all three points,” Zeigler said. “The kid didn’t score a single point on him. We gave him a penalty point on a hand to the face and Trent knows better than that, he was even warned. Then a locking hands, another young wrestler mistake. You can’t give those away to a good kid in a tough match.”

Georgian scored the match-winning point when Mast allowed him to escape in an effort to pull out the win on his feet.

“Then we kicked him once going for the win,” Zeigler said. “It was a tough loss there because we didn’t feel we were beat but we ended up on the short end. He came back and wrestled tough.”

Neikirk recorded back-to-back pins before dropping a 13-2 decision to Kirtland’s Mike Calvert in the 132 pound semifinals. He then rebounded with a win over Harvey’s William McClain to finish third.

“Brandon sometimes gets himself in some funny predicaments,” Zeigler said. “I talked to him after that (Calvert) match. He made a lot of mistakes and put himself in bad situations. We told him after that you’ve got to get back to just solid, basic fundamentals. Brandon doesn’t like to spend a lot of time on the mat. He wants to go out and pin a kid and get off the mat. Sometimes he gets a little overzealous with that and gets himself in bad positions and gives up back points. That’s what happened with Calvert. It just got out of reach.”

Heavyweight Lester Troyer, a first year wrestler, finished fourth in one of the strongest weight classes in the tournament.

“It seems like every time I don’t have a heavyweight there’s like nobody there,” Zeigler said. “I fill up the heavyweight and I tell them, ‘You’re going to be fine, there’s never anybody at heavyweight.’ It was a brutal heavyweight.”

Troyer opened the tournament with a bye then pinned Wickliffe’s Pat Sheridan in 45 seconds. He suffered a similar fate in the semifinals when he was pinned in the first period by Aurora’s Josh Burger, who finished eighth in the state in Division I last season and is ranked fourth this year.

He then avenged an earlier loss to Harvey’s Derrick McGarvey with a 1 minute, 26 second pin in the consolation semifinals.

“I was just thrilled to death for Lester,” Zeigler said. “If you could have seen the smile on his face; he was so excited. He told me before that match with the Harvey kid, he said, ‘I’m not losing to this kid again coach.’ He was so serious. He was just on a mission. He was just not going to lose to that kid again. He made a mistake in the first period, walked right up into the guy and got thrown to his back. He fought off his back for a minute and a half it seemed like but he didn’t get pinned and he came back in the second period and we put him on top and he just jumped on the cradle. It was beautifully handled.”

Independence’s Paul Deely, a returning state qualifier who is ranked fourth in Division III this season, pinned Troyer in the third place bout.

Brandon Nevison was Cardinal’s only other placer. He finished fifth at 120 after suffering a bit of an upset to Harvey’s Elijah Brown in the quarterfinals. Nevison beat Brown earlier this year at the Cardinal tournament but got caught on his back on Saturday.

He rebounded with three consolation bouts to reach Saturday night’s finals, where he avenged the loss to Brown with a 4 minute, 59 second pin.

“He was a little overconfident (in that first match) because he beat the kid before at our tournament, in the finals, but Brandon hasn’t wrestled in a long time,” Zeigler said. “He’s been off the mat and that makes a difference. He made a critical mistake and reached back over his head and got thrown to his back. Going into that match he was way overconfident. He was just rusty. He came back and got the redemption in the finals, which was really good.”

“We had tough draws all along,” Zeigler said. “Khaleel had a seedable record and draws right into the second seeded guy. Havel did the same thing. In our cross-brackets we ended up crossing into the large school division. It seemed like that’s how our day went. We just didn’t get good draws for some of those guys.”