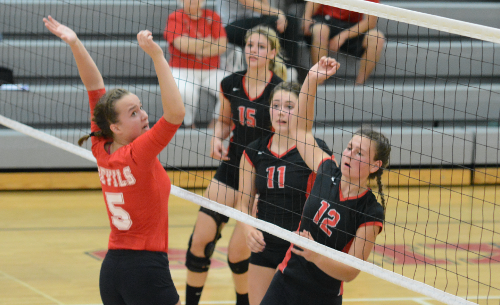 Cardinal rallies for win at Crestwood

Remember when Crestwood came from behind to defeat Cardinal in the 2014 season opener? The Huskies did too and they weren’t about to lose a second straight to the Red Devils.

Cardinal rallied from a 2-1 deficit in Mantua on Tuesday to win the final two games and the match, 3-2.

“It was an awesome night of volleyball for the Cardinal Huskies,” said Cardinal coach Karisca Chambers, who improved to 2-0 in her first year at the school. “They were out for blood tonight. They did not start out slow like we did against West Geauga (in Saturday’s win).”

Cardinal opened the match with a 26-24 win in game one but dropped the next two sets to the Red Devils.

“At that point they were pretty gassed,” Chambers said of her players. “Both teams getting over 20, that’s a lot of volleyball. We just did a little pep up, rah-rah speech to get them fired up and ready to play. I said, ‘We will go five games with them. I don’t know if you need to pretend it’s Berkshire on the other side of the net or what but you need to get some fire underneath you to finish this out.’”

Caitlyn Lechene was nearly unstoppable as she posted a match-high 23 kills and added 39 digs.

“After game one and about halfway through game two Caitlyn Lechene already had 10 kills,” Chambers said. “She was just on. She had a hot hand and Maddie (Bean) did a fantastic job of getting her the ball. She did incredible.”

“When we played West Geauga it seemed like her approach was off and she wasn’t reaching her arm up and she had a weird elbow problem going on,” Chambers said. “Tonight she was taking her full approach and jumping, getting on top of the ball and snapping all the way through. It was pretty much a kill every time she had the ball. She just took control.”

Bean recorded 49 assists in the match and Jordyn Schultz contributed with 17 kills.

Megan Zeigler and Delaney Leichtman pitched in with 47 and 29 digs, respectively.

Zeigler’s performance was especially impressive considering she is battling through an injury.

“She has been fighting through a back injury since the beginning of the season so she has been in some pain but she was still all over the court picking up balls here and there, diving here and there,” Chambers said. “She didn’t let that injury defeat her.”

Leichtman overcame some adversity of her own.

Crestwood’s servers had targeted her throughout the early games, which forced Chambers to substitute Trisha Cesar for Leichtman.

“At some point I noticed that they were targeting Delaney because she had shanked a couple passes,” Chambers said. “I actually pulled her out of game four because they kept hitting her and she kept shanking it. I put Trisha Cesar in to give Delaney a little wakeup call and breather and to get her some water to kind of refocus and come out there. I let Trisha finish up and we won that game. I actually started Delaney in the fifth game. She had the best game. She played awesome and didn’t shank any passes, was moving her feet and covered all of the area that she was supposed to cover. I think pulling her out and kind of giving her a second to refocus and getting her back in the game was what we needed to do as a team tonight.”