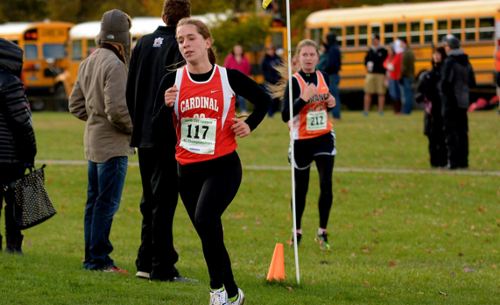 Cardinal’s girls’ cross country team come up short in its bid to advance to the Division III regional meet, but the Huskies closed out their season in style.

“That doesn't happen often," said Cardinal coach Megan Cameron. "We went into the day hoping that everyone would run their best and that’s what we did. Everyone ran their lifetime best. That was good for each of the senior girls and I was extremely encouraged by the amount of effort and motivation and determination that each of the girls had. Even though we didn’t qualify, I’m still really proud of each of the girls.”

Senior Emily Kruse led the Huskies with a 20th place finish in a time of 21:44. She average 6:59 per mile. Only the top 16 individuals advanced to regionals.

“I think she was really excited with her performance,” Cameron said. “She was excited she ended her career better than she started it.”

Senior Maddie Dobay was Cardinal’s next highest finisher. She was 29th with a time of 22:36.

“She is a soccer player as well so it seemed like she always had meets that were really good or she struggled a little bit. I think she’s carrying a lot on her back with college credit courses and soccer, but she had a great season,” Cameron said. “Being able to support the team and stepping up to get second place on the team for her last race of her senior year, I think she really gave it her all.”

Senior Noel Springer was fourth on the team with a 40th place finish in 23:37.

“This is her first year running so I think that starting out running 27 or 28 (minutes) and finishing up the season running in the 23’s, she has a lot to be proud of,” Cameron said. “She’s not really a veteran runner yet but she worked really, really hard. She had the flu this week and hadn’t eaten in a few days when she ran. I was actually really surprised at how well she performed on Saturday. I’m looking forward to track season with her and Emily.”

Juniors Alissa Nevison and Shelby Miller finished 30th and 47th, respectively. Nevison ran the race in 22:43 while Miller clocked a 24:23.

“I’m really looking forward to next season,” Cameron said. “I think Alissa and Shelby are going to be really good, strong leaders. They’ve already been talking about how we can get more girls out for cross country so I’m looking forward to another season with them.”