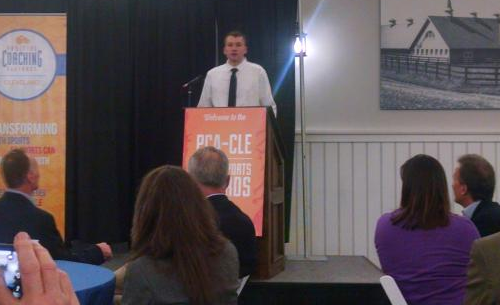 The Grit Award is presented to a student-athlete who, "personifies the characteristics of resiliency, determination and a never-give-up attitude. The athlete receiving this award has overcome a significant life challenge, demonstrating grit both on and off the field, inspiring everyone around them by their actions and their attitude."

Mrosko was involved in a near-fatal accident after his his eighth grade year. After multiple surgeries and grueling rehab, Mrosko returned to play both football and basketball at Cardinal. He was the starting tight end on the 2014 team that finished 8-2 and was named second team All-Chagrin Valley Conference and first team All-Geauga County.

Cardinal is one of several local high schools and youth sports organizations that has partnered with Positive Coaching Alliance to promote "better athletes, better people." PCA is a national organization founded in 1998 by Jim Thompson. Its mission is to replace the "win at all costs" mentality with the idea of the "double-goal coach," and to help develop "triple impact competitors" who strive to make themselves better, their teammates better, and their sport better.