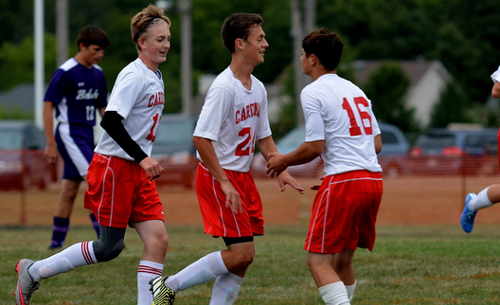 MIDDLEFIELD—Cardinal High School recognized its seven seniors prior to Monday’s non-conference showdown with Newbury on Monday at Richard A. Moss Field. Sophomore Jake Revak then went out and stole the show.

Revak scored five goals tying the school record set by Bobby Ammons against Grand Valley in 2008 to earn a 5-5 tie with the Black Knights.

“My team was just giving me good through balls and I just had good touch today,” Revak said.

Newbury jumped out to a 2-0 lead before Revak found the net for the first time midway through the first half. The Black Knights responded to make it 3-1at 18:55 but Revak again found the back of the net to pull the Huskies to within one at the break.

The Black Knights made it 4-2 just two minutes into the second half and held that lead until Revak broke free once again for his third goal of the night with 19:55 left in the game.

A penalty kick gave the Black Knights a comfortable 5-3 lead with 10:55 to play but the Huskies never quit.

Revak scored his fourth goal of the night with 5:44 left to play and just over a minute later he headed in a pass from Jonathan Anderson to tie the score.

“They meant a lot,” Revak said. “They’re just really good people and they’re my friends. I’m sad to see them go but it’s been a fun season.”