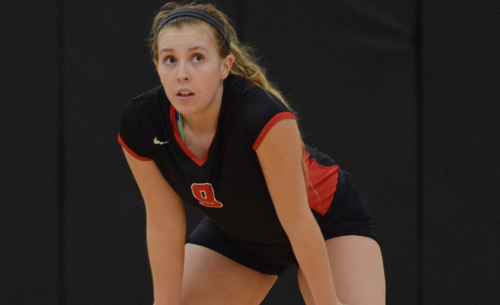 Kaitlin Bean ended her high school volleyball career with back-to-back conference titles, a host of impressive statistics and a legacy that helped to raise the bar for the Cardinal Huskies that follow in her shoes.

On Tuesday, she signed a National Letter of Intent to continue her education and playing career at Ashland University.

“It feels so great just knowing that all my hard work all these years paid off finally and now I’m signed,” she said. “I don’t have to worry anymore. It’s awesome.”

Bean began playing Junior Olympic volleyball as a child and developed into one of the best players ever to wear a Cardinal uniform.

Bean was just impressive on defense, where she was 458-of-486 on defensive passing opportunities.

For her efforts, Bean was named first team All-Chagrin Valley Conference and second team all-district. She also was an OhioVarsity.com and News Herald Player of the Week and was selected as a WEWS/McDonald’s Student Athlete of the Week.

She helped lead the Huskies to a second straight CVC Valley Division championship and an 18-7 record in 2014. The Huskies played in back-to-back district championship games.

“She’s the type of player that every coach wants to coach,” Shirkey said. “She’s a great leader, a great competitor and she never gives up. She’s focused, she’s determined and she has a lot of perseverance. She’s calm under pressure, which helped us a lot this season.”

According to Bean, one of her greatest accomplishments was to help redefine the Cardinal volleyball program and she hopes her former teammates remember what it takes to be successful.

“It feels awesome knowing that you left an impact on the team and school history,” Bean said. “I’m really proud of what we accomplished through my three years of being here. It was just a good feeling to leave that legacy on the court.”

Before choosing Ashland, Bean had her sights set on a bigger stage.

Then she visited Ashland and reconnected with Eagles coach Cass Dixon, a former coach with the Cleveland Volleyball Club.

“I’ve known the coach since I was about 10 years old because she coached at CVC and so I’ve known her for a while,” Bean said. “First I wanted something bigger but then once I visited, and I knew Cass, it just felt like home to me. I love the girls, the team; just everything about it was what I wanted.”

Bean expects to suit up for the Eagles as a defensive specialist/libero.

Soon she’ll sport the purple and gold of the Ashland Eagles but she’ll always remember her time as a Cardinal Husky.

“Getting to play with these girls since rec volleyball, since fourth grade, we’ve grown up playing together, it’s just an amazing feeling,” she said.