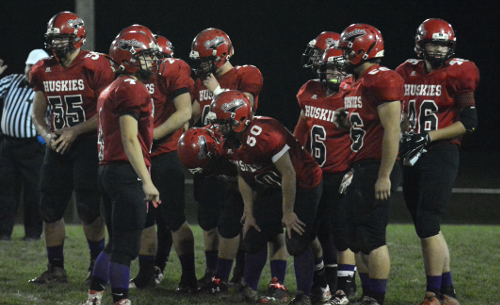 After a 40-21 win over Hawken on Friday, Cardinal is one step closer to playing in Week 11 for the second time in school history.

Clark Thurling returned the opening kickoff 90 yards for a touchdown and the Huskies rushed for 435 yards on 51 carries to improve to 7-2 on the year.

“It was a pretty clean victory,” said Cardinal coach Eric Cardinal. “I thought we played a good defensive game and a good game on offense. We have some things to clean up, which is always a good thing, but it was a pretty well blocked and run game.”

Thurling, who also returned the opening kickoff for a touchdown in last week’s win over Fairport Harding, led the Huskies with 135 rushing yards on 14 carries and also scored two touchdowns. Lester Troyer gained 85 yards on 10 carries and KC Cress contributed with 74 yards on just three rushes.

Even two-way lineman Logan Schultz saw action in the backfield. He carried the ball twice for 13 yards and scored on a 7-yard run in the second quarter.

“No. 55 got a TD tonight as an upback,” Cardinal said. “That was in our One-Ton Package. The kids were calling it the wonton. Maybe they thought we had Chinese soup or something.”

In all, nine different Cardinal players had at least one carry and seven of them averaged at least 5.8 yards per carry or better.

Hawken scored 21 points but Cardinal’s defense limited the Hawks to just 234 yards of offense with 73 of those coming on the first play after Thurling’s kickoff return for touchdown when Koron Davis ran for a long touchdown to give the Hawks a brief 7-6 lead.

The Hawks blocked a punt in the second quarter and took advantage of the short field to score its second touchdown and returned a fourth quarter fumble to close out the scoring.

“It was a pretty clean victory,” Cardinal said. “They got seven in the last minute when we put the ball on the ground and the kid scooped it up and scored. It’s Hawken. Whether they have a two-win or a 10-win season they’re well-coached and fundamental. If you give them a chance they’re opportunistic. They blocked a punt and had a short-field touchdown and they had a scoop and score touchdown. They also had the big play on the first play from scrimmage.”

Aside from their miscues, the Huskies dominated the game.

After Davis’ early touchdown the Huskies scored 27 straight points to make it 33-7 midway through the second quarter.

Cress ran for a 32-yard score and Troyer followed that with a 4-yard TD run. Thurling made it 27-7 with a 3-yard run early in the second quarter and Schultz closed out the Husky scoring streak with his first career touchdown carry.

Thurling scored on a 38-yard run in the third quarter to close out the scoring for the Huskies.

“It was senior night, so it was good to see all the seniors out there making plays,” Cardinal said. “KC Cress had another really good game on both sides of the ball and Logan Schultz had a great game and Noah Farmwald, he’s a junior, but what a technician. He made a block 20 yards down the field and knocked a guy head over heels.

Our stable of running backs all ran really well. The Guinn twins both had a nice game. They’re both coming off ACL tears and missed their sophomore years. They look like guys that are coming into their own post-surgery. I thought they both had pretty good games on offense and Jeff played a pretty good linebacker for us.”

The Huskies close out the regular season on Friday at Berkshire. Cardinal needs a win over their rival to hold on to the No. 8 spot in Division V, Region 15.

“We’ve got some things we’ve got to get better at for the Badgers next week,” Cardinal said. “It’s a rivalry game. If we’re successful next week we’ll see where we’re at next Sunday and hopefully we’ll be game planning for Week 11.”