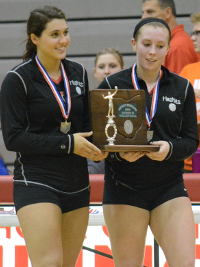 LEAVITTSBURG–Cardinal seniors Alyssa Shirkey and Kaitlin Bean walked off the court at LaBrae High School on Wednesday night fighting off the tears welling up in their eyes. Tears no doubt caused by a 3-0 loss to Gilmour Academy in a Division III district final.

“Set 1, obviously we didn’t show up,” said Cardinal coach Lisa Shirkey. “I thought we did some good things in set two and set three but we never found that consistency and momentum and that’s huge. It’s a whole different league when you play teams like Gilmour.”

The red, watery eyes of Cardinal’s seniors could just have easily been the result of the joy that overcame them when reflecting on what each accomplished in her Husky career. Shirkey and Bean were part of Cardinal teams that won back-to-back undefeated Chagrin Valley Conference titles and also led the Huskies to consecutive district runner-up finishes.

They just didn’t have enough firepower to compete with the Lancers.

Make no mistake, Gilmour has a very good volleyball team and it should. The Lancers are made up by some of the east side’s top high school volleyball players.

Just one of the Lancers is listed as having attended Gilmour Middle School. The other 14 come from cities such as Chesterland, Highland Heights, Aurora, Lyndhurst, Perry, Chagrin Falls, University Heights, Mentor, Kirtland and Solon.

Meanwhile, on the other side of the net, the Huskies are all homegrown. Middlefield born and raised.

In fact, seven of the nine players listed on the Cardinal varsity roster have parents who attended Cardinal High School. The parents of the other two attended nearby schools West Geauga and Berkshire.

The Cardinal players were born into the program and played for their school, their community and their teammates.

That’s what makes the accomplishments of Shirkey and Bean, as well as their younger teammates, so special.

“As far as our program, the girls have always bought into it,” coach Shirkey said. “It’s a testament to the hard work and determination that they have.”

While their high school careers came to a close on Wednesday, Bean and Shirkey both likely have a lot of volleyball left to play.

Bean already has committed to play volleyball at Ashland University and Shirkey is weighing her options.

Both leave behind lasting legacies.

“Big shoes to fill with those two,” coach Shirkey said. “Kaitlin, she’s a rock. She has accomplished so much in her volleyball career and grown so much as a player and a person. Kaitlyn is going to help Ashland University’s program big time. Alyssa, she hasn’t made any decisions yet but she’s definitely thinking about it. She’s grown so much as a player and an individual. “

The Huskies finished the year with an 18-7 record.