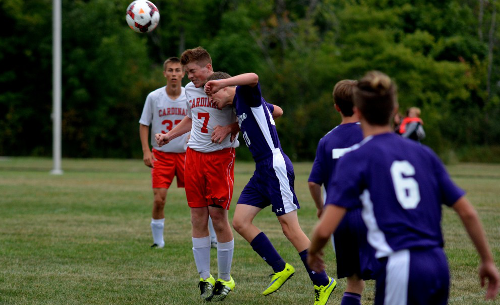 MIDDLEFIELD—Cardinal’s 6-0 loss at Tallmadge in Saturday’s season opener was a wakeup call of sorts for the young Huskies.

They responded with a 3-0 win over rival Berkshire on Tuesday.

“It was a good game,” said Cardinal first-year coach Mike Topalian. “This is a really young team but they’re learning and trying to get the basic skills down and we’re still trying to work as a team. Anytime you get a shutout it’s a good thing. We had some kids that played really hard.”

Jacob Revak gave Cardinal an early 1-0 lead when he buried the ball into the left corner of the goal in the eighth minute. Jonathan Anderson’s chip shot over the Berkshire keeper’s head made it 2-0 four minutes later.

“Tallmadge kind of gave us a wakeup call there. We thought it would be a close call but they ended up beating us pretty darned good,” Anderson said. “It was kind of a shakeup at the beginning of the season but it was a good comeback to beat our rival. Coming back and beating our rival in the second game was perfect. It was exactly what we needed.”

The Huskies, 1-1, maintained that 2-0 lead into the second half until Alex Hutchinson placed a shot in between the keeper and the far post to close out the scoring.

“They’re great kids,” Topalian said of his scorers. “They’re really working hard and being leaders on the team. We’re really trying to get some offensive firepower. We struggle to score goals so it was good to get three. We’ve been working hard on our basic triangles. It was nice to spread the field. We did it at times and other times we still clumped too much.”

“We didn’t have anybody at goalie and he stepped up and has been working so hard all summer,” Topalian said. “He’s a tough-minded kid.”

“I’m just proud of all of them, especially our captains,” he said. “They gave us some senior leadership. It’s such a young team and with Cole and Kathryn we really rely on them.”