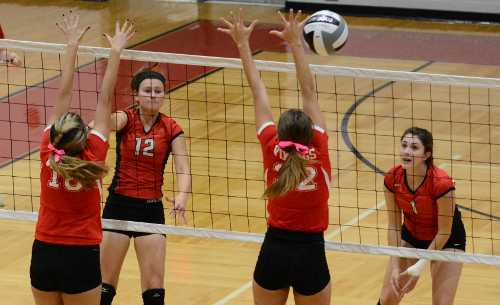 LEAVITTSBURG—If Cardinal’s volleyball team was looking ahead to a potential rematch with Berkshire, it didn’t show.

The Huskies cruised to a 25-15, 25-15, 25-18 sweep of LaBrae on Thursday to win a fifth straight sectional title. Berkshire defeated Garrettsville Garfield in the second game to set up the rubber match between the rival schools in Monday's Division III district semifinals.

“We want to play Burton again,” said Cardinal senior Caitlyn Lechene. “We want to prove we can beat them twice in a season.”

Berkshire won at Cardinal on Sept. 10. The Huskies earned a split at Berkshire on Oct. 8. One of those teams will advance to Wednesday’s district final against the winner of the Newton Falls-Kirtland game.

“As you progress through districts you can’t help but get more intense and more excited as you go through the season, because every year it seems like Cardinal or Berkshire, we make it to the finals then we can’t get out of the finals," said Cardinal coach Karisca Chambers. "I told the girls this is the year. We’ve had so many goals but tonight we had to take care of LaBrae. They’re a good team. They have some nice hitters and a good back row. “

Cardinal got off to a hot start and never cooled off.

The Huskies went on a 6-0 run to take a 13-7 lead in the first set and maintained that intensity throughout the match.

“I said, ‘Tonight we just have to take one game at a time and don’t come out timid, don’t come out flat,’” Chambers said. “I told them to come out ready to go and they did a nice job of that.”

LaBrae senior Miranda Dodrill entered the match with 308 kills. Cardinal held her to just eight, nearly half of the 15 kills per game she averaged.

“As soon as she started attacking us in the game I looked at one of my coaches and I said, ‘She’s their good hitter. We have to get a block on her,’” Chambers said. “I thought we did a good job of reading where she was. There were a couple times where Trisha (Cesar) or whoever was in the middle was not able to read the set and get there however I thought we did a nice job of kind of shutting her down a little bit. Even when the block wasn’t there I thought Jordyn (Schultz) and Caitlyn Lechene or whoever was in the back row against her did a nice job of stepping into that hole and picking up some of her hits.”

Cardinal beat Berkshire in three sets in the 2013 district semis before losing to top-seeded Gilmour Academy in the championship game for the second straight season.