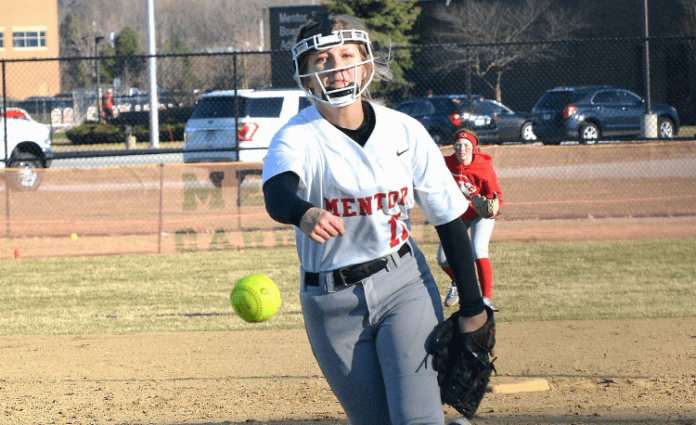 Mentor didn’t have a problem competing in its Greater Cleveland Conference games last spring. Where the Cardinals struggled was finishing off those games.

With seven returning starters and a pair of talented freshmen, the Cardinals hope to change their fortunes in 2019.

“One of our goals is to challenge the top teams in our conference,” Mentor coach Michelle Thompson said. “Last year, we were right in the game with them but lost our focus in the later innings where we couldn’t finish. We need to finish games this year by being consistent from first pitch to last out.”

Mentor finished 10-10 overall last spring with a 5-7 mark in the rugged GCC.

Temple, a Mount Union recruit, is among the fastest players in the area.

“She is a triple threat at the plate,” Thompson said of Temple. “She can hit away, slap and bunt. She will use her speed in center field for us.”

The Cardinals have a pair of returning first team All-GCC honorees at second base and shortstop in juniors Peyton Dolejs and Casey McHugh.

“She controls the right side of the infield playing second base,” Coach Thompson said. “Her range is unbelievable. Peyton has power at the plate and speed on the bases.”

McHugh is as equally talented at the plate as she is on defense.

“Casey McHugh controls the left side of the infield playing shortstop for us,” Thompson said. “She is so consistent at the plate. She always finds a way to get on and she provides speed on the bases.”

Freshman Kiley Markowski hopes to make an immediate impact for the Cardinals this season as she worked her way into the starting lineup at first base.

Junior Caitlin Dems will team up with Dolejs to give the Cardinals an impressive one-two punch in the circle. Add in freshman Leah Temple and Mentor has one of the most impressive pitching depth charts in the area.

Now, the Cardinals have to put it all together and maintain their focus from the first pitch to the last.

They got off to a great start with a 23-2 win over visiting Euclid on Monday but will face a much stiffer test when they travel to Elyria on Wednesday.

Mentor back on track