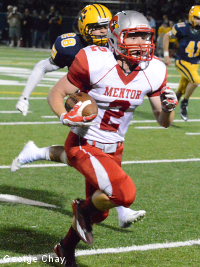 Mentor went to Byers Field on Sept. 6 to renew acquaintances with rival St. Ignatius, but it was also a fact-finding mission for Cardinals coach Steve Trivisonno.

Here’s what Trivisonno found out: The fact is Mentor is a very good football team and the Cardinals are only going to get better.

Mentor senior quarterback Jake Floriea threw two fourth-quarter touchdowns – the final being the game-winner to Jason Blizzard with 7 minutes remaining – as the Cardinals rallied in the second half to knock off St. Ignatius, 37-33.

Floriea, who ran for an 11-yard TD in the first quarter to start the scoring for Mentor, found Eddie Daugherty early in the fourth quarter on a fade pattern down the sideline that helped the Cardinals (2-0) erase an 8-point deficit and tie the game at 30. And then following a field goal by the Wildcats, Floriea threw a strike down the sideline to Blizzard for the lead with 7:18 to play in the fourth quarter.

Daugherty, who doesn’t usually play defense, was inserted with 11 seconds a St. Ignatius (1-1) was looking for a miracle finish, but the Eastern Michigan recruit intercepted the final pass of the night to seal the win.

The fourth-quarter flurry for Mentor came after St. Ignatius scored 21 straight points in the third quarter to take a 30-22 lead into the final 12 minutes of play.

“We talked all week that we had to battle and we battled tonight,” Trivisonno said. “You never know until you play a game how kids will battle and they responded tonight when we were down.

“Both teams are going to get better. I think they are going to be great and I think we have a chance to be pretty good.”

Floriea, in his first year as a starting quarterback and experiencing his first battle with St. Ignatius, said the win feels good, but the focus has to immediately switch to Week 3 and the home opener vs. Euclid.

“It feels incredible, but in 12 hours I have to forget about it and get ready for Euclid,” Floriea said.

Daugherty feels the Cardinals haven’t even scratched the surface of how good they can be, although a big Week 2 win at Byers Field over St. Ignatius is a good start.

“When our quarterback gets time and receivers get open and the offensive and defensive lines are playing like they can, there’s no telling how good we can be,” Daugherty said. “The key is to go back to work and keep getting better. We have to put this one behind us now and get ready to go home for Euclid.”

Mentor running back Alex Mathews had a big night vs. St. Ignatius with two rushing touchdowns and a 2-point conversion run.

“Alex is going to be the real deal. He is pretty special,” Trivisonno said.