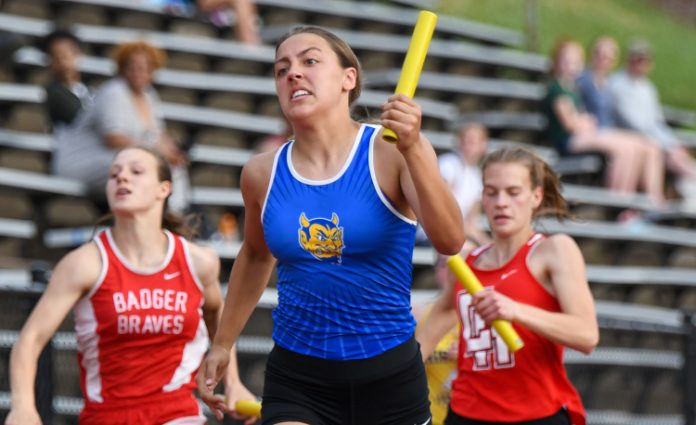 Casey Adams won one event and placed in three others in leading Independence’s girls’ team to a first-place finish at the Cuyahoga Heights Relays on Saturday.

Adams won the long jump with a mark of 16-feet, 7 ¼-inches, and finished second in the high jump. She also ran a leg in the 4×100-meter relay and 800-meter Sprint Medley.

“I was happy with my performance because it earned the team points, however, I always strive to match or improve my (personal record) at each meet,” Adams said. “The key to my success in jumping is really the mental part of it. I always try to visualize my best jumps beforehand, and if I ever put too much pressure on myself, I remind myself that above all I am here to have fun and do what I love.”

Adams finished second in the high jump to All-Ohioan Jenna Young of Brooklyn. Young cleared 5-7 while Adams maxed out at 4-10.

“Overall, the (Chagrin Valley Conference) is packed with a huge amount of track talent and Jenna is a great example of that,” Adams said. “Seeing her at almost every meet really does provide me with amazing competition and she pushes me to do my best.”

Adams teamed up with her sister Alex Adams, Skylar Leichliter, and Grace Taliaferro to place second in the 4×100-meter relay in 52.93. That same group placed third in the 800-meter Sprint Medley in 2:00.64.

“Out of my two running events, the 4×1 was the most exciting because we are seeing huge potential from that team,” Adams said. “I look forward to competing with them when conference and districts come around.”

Richards, Coljohn, Moreal, and Avery Vilecheck added a fifth-place finish in the 4×400 and Luciano, Vilcheck, Nina Funk, and Marissa Taylor placed seventh in the 4×200 (2:11.70).

“Jessica had a stellar day in discus, so we’re proud of her performance and her teammates helped them do well and get first in shot and disc,” said Independence coach Jess Crooks.

Panichi and Vilcheck finished tied for fifth in the pole vault (6-0).

The Blue Devils finished second to Cuyahoga Heights in the boys’ competition. The RedWolves scored 111 points while Independence finished with 83 ½.

Boscarelli also won the long jump with a best leap of 19-feet, 4-inches.

“He comes to compete,” Crooks said of Boscarelli. “He had a great day in the long jump and then we asked him to do two 100s in the 4×100 and sprint medley. We had clean handoffs and he had a strong performance in his 100s. He had a great day.”

“Jack Taliaferro had a really big day,” Crooks said. “He had a great day and never complains. He always does what we ask of him. If we didn’t have Jack, we wouldn’t have scored second.”