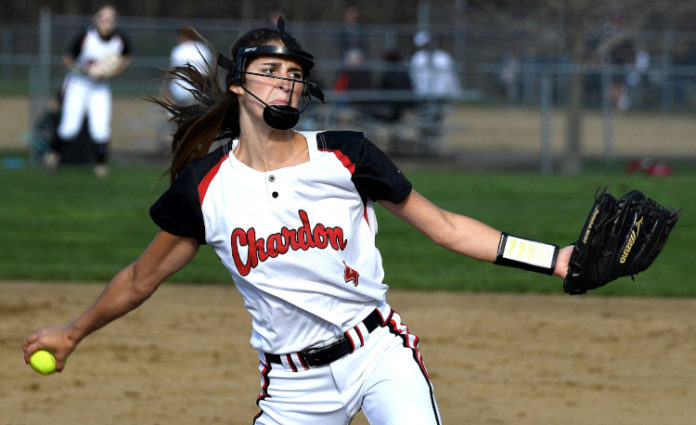 An unlikely hero emerged in Chardon’s 5-4 win over previously undefeated Riverside on Monday.

Sophomore Madison Zombory stepped to the plate as a pinch-hitter in the bottom of the fifth inning with a runner on third base and the Hilltoppers leading, 4-3. What she didn’t know at the time was that her RBI groundout would prove to be the difference in knocking off the Beavers.

“She’s been the hottest hitter on the JV team,” said Chardon coach Stewart Landies. “We made the decision (to bring her up) and she came through in the clutch just like I expected her to.”

Riverside added a run in the top of the sixth but Kayla Noerr retired the Beavers in order in the seventh to seal Chardon’s win that shook the standings in the Western Reserve Conference.

“I didn’t tell them about it, but I know it,” Landies said of Chardon’s game against Riverside being a must-win contest. “Every game here on out is a must-win for us.”

Landies is right as the Hilltoppers are in a three-way tie for second place in the WRC. Chardon, North, and South all are 6-2 while Riverside is in first place with a 7-1 record. Madison is in fifth place with a 4-3 mark but the Blue Streaks still have a path to the title.

Riverside jumped out to a 3-0 lead thanks to a trio of two-out runs scored in the top of the first.

Emily Lamos, Delaney Keith, and Maren Kelly all walked with two outs and Molly Binkiewicz hit a two-run double. Kelly also would score in the inning.

Chardon responded with two runs in the bottom half of the inning and two more in the second to take a 4-3 lead.

Noerr doubled with one out and Madison Russo drew a walk. Madison Hauser singled to load the bases and Amy O’Brien hit an RBI single. Russo scored on Sarah Sutton’s groundout to pull the Hilltoppers to within 3-2.

Sidney Nagaj singled to start the Chardon second and Grace Legan walked, Both runners moved up on a wild pitch. Nagaj went on to score on a passed ball and Noerr hit an RBI single to give Chardon a 4-3 lead.

It remained that way until Zombory’s pinch-hit groundout in the fifth.

Binkiewicz, Katie Ross, and Abby Watson drew walks to start the Riverside sixth. Emma Kovalchuk then drew a one-out walk to cut the Beaver deficit to 5-4 but Noerr retired the next two Riverside batters to end the threat.

Noerr went the distance for the Hilltoppers. She allowed four earned runs on just two hits and struck out 10. She did walk nine batters but made up for it at the plate as she was 3-for-4 with a double and an RBI.

“I’m going to look forward to seeing that kid in a Butler (University) circle next year and not a Chardon circle,” said Riverside coach Bill Ross. “That kid is something else. Give her all the credit in the world.”

Sutton finished 2-for-3 for Chardon.

Binkiewicz and Megan Lehner had Riverside’s only two hits of the game.

Riverside dropped its first game of the season but the Beavers aren’t going to hang their heads with so much left to play for.

“We knew we were fortunate to be 15-0 at this point,” Ross said. “We knew once we got into the heart of (the schedule) with the Souths, the Chardons, Madison, and North, things were going to pick up.”

Madison Zombory of @Topper_Softball had the clutch RBI in her team’s victory over Riverside today. pic.twitter.com/nPTU0FjV7R