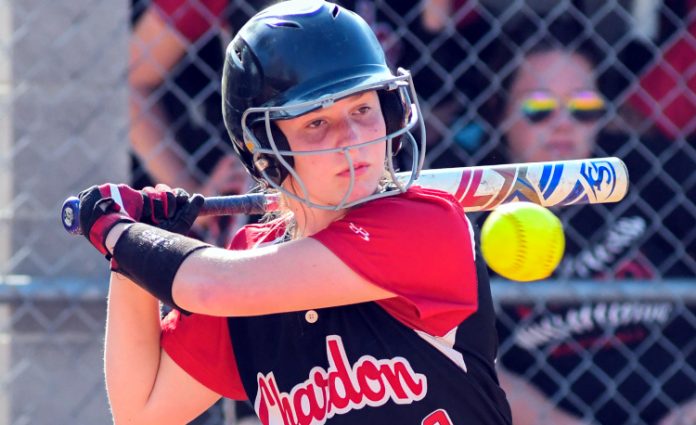 With the win, the Hilltoppers improved to 15-8 overall and 8-2 in the Western Reserve Conference. Chardon can earn a share of the conference title with wins over South and Kenston and two Riverside losses in its last three games.

“It was a good game,” said Chardon coach Stewart Landies. “We needed a game today and it was funny because I was able to tell when I walked into the park they were ready to go. For the first time this season, I showed up and all the bases were in, the Bownets were set up, and the tees were set up, and they were all there. I hadn’t seen that before and I thought it was going to be a good day.”

Amanda Dobida and Olivia Augusta hit back-to-back two-out singles in the top of the first and Juliana Augusta hit an RBI single.

Autumn Fester and Lily Namestnik then drew back-to-back walks to start the second and Katie Bucy reached on an error to load the bases. Fester scored on Breonna Preston’s fielder’s choice but the Hilltoppers turned a double play when pitcher Sydney Murray fielded a ground ball and threw to the plate for a force-out. Mackenzie Kilpeck’s throw then beat the runner to first to complete the double play and Murray struck out the next batter to end the North threat.

Chardon tied the game with two runs in the third and went ahead with a two-run fourth and two-run fifth.

Savannah Murray singled to start the Chardon third and she scored when Jadyn Tarantino reached on an error. Tarantino scored on a groundout to tie the game.

Amy O’Brien and Madison Zombory both hit singles in the fourth and scored on Sydney Murray’s two-out single.

Chardon closed out its scoring with two runs on two outs in the fifth.

Sidney Nagaj doubled, O’Brien singled, and Sarah Sutton drew a walk to load the bases. Zombory then knocked in two runs with her second hit of the day.

“I was happy with my performance tonight, especially because it was a big conference game,” Zombory said. “I feel like all the hard work I’m putting in is paying off.”

Zombory finished the game 2-for-3 with a run scored and two RBI.

“I put in a lot of practice and I didn’t overthink,” she said. “I went up there with the goal to make contact, and I did it.”

Two errors allowed North to score a run in the seventh but O’Brien limited the damage to seal Chardon’s win.

Sydney Murray started in the circle for the Hilltoppers and allowed two runs on five hits and struck out three in five innings to earn the win. O’Brien allowed one unearned run and struck out one in two innings of work.

“We had their seven, eight, and nine hitters coming up in the sixth inning and I wanted to make sure we got those three outs,” Landies said of using two pitchers. “I told myself if we put a runner on I was going to bring in Amy because she’s very consistent. She doesn’t have the movement or the speed that Syd has but she’s consistent and she’s been doing it all season long, she just slams the door.”

Olivia Augusta and Juliana Augusta both recorded two hits for the Rangers, who dropped to 10-5, 6-2. Dobida allowed four earned runs on seven hits and struck out four in five innings. Taylor Bard threw the sixth and allowed one hit.

“We haven’t played good softball the last two nights,” said North coach Matt McPeek. “We are giving good, well-coached, veteran teams too many outs with both physical and mental errors and we’re paying for it. I need to do a better job of correcting mental mistakes. In contrast, we’re not putting enough pressure on opposing defenses and our hitting is not consistent enough each time through the order as it has been in previous games.”