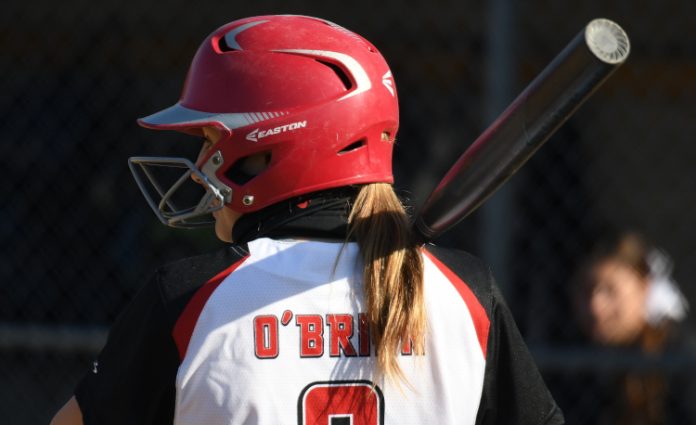 Chardon extended its winning streak to four straight games with a 6-4 nonconference victory over visiting Wickliffe on Friday.

Junior Josie LoCoco picked up her first pitching victory after allowing four runs on six hits and fanning two in 4 1/3 innings of work.

“She came to every single winter workout and she earned a start,” said Chardon coach Stewart Landies. “I was really hoping she’d give us an opportunity to play defense and she did. Our defense has been really good all season and that kept up tonight. She has good spin on her pitches and she can locate them. They started hitting her the third time around and we brought in Amy O’Brien and she shut the door.”

O’Brien allowed one hit and struck out two in 2 2/3 innings.

She also had a big day at the plate as she finished the game 3-for-4 with a run scored and she knocked in two runs.

“I’m getting more and more comfortable each at-bat and I’m stepping up to the plate with confidence,” O’Brien said. “Coach (Lincoln) Tosti has really helped me learn how to relax in the batter’s box and just trust my swing.”

That confidence carried over into the circle when she entered the game in the fifth inning with the Hilltoppers up 6-4 and two runners on with one out. She struck out the first batter she faced on three pitches and then recorded the final out of the inning to preserve the Chardon lead.

“I came onto the mound tonight with a positive attitude because I knew my defense would back me up,” she said. “I was relaxed and knew that if they got a hit my defense would cover for me.”

Wickliffe took a 1-0 lead in the top of the first when Laylah Ruscin singled and stole second, moved to third on a ground out, and then stole home.

The Hilltoppers responded with two runs in the bottom half of the inning.

Grace Legan singled and scored on Sidney Nagaj’s double. O’Brien then singled to give the Hilltoppers a 2-1 lead.

Wickliffe tied the game in the third on Abby Schneider’s RBI single but again, the Hilltoppers responded.

O’Brien led off with a single and moved to second on an error. She scored on Sarah Sutton’s RBI single. Madison Zombory then singled and scored on Madison Kilpeck’s single. Kilpeck later scored on a ground out that left the Hilltoppers in the lead, 5-2.

Chardon added a run in the fourth on singles by Legan and O’Brien.

Wickliffe closed the gap with two runs in the fifth.

Ruscin, who finished 3-for-3, singled with one out and Mackenzie Gazdek walked. Bryanna Butler then singled home both runners and Schneider hit a single that forced Landies to go to his bullpen.

O’Brien pitched out of that jam and then in the sixth, Wickliffe benefitted from an error and a walk but couldn’t get the clutch hit. O’Brien retired the Blue Devils in order in the seventh to record a save and extend Chardon’s winning streak.

“These past four wins have been great,” O’Brien said. “We’re coming together as a team and it’s always more fun to win.”

Legan contributed to the win with two hits, including a double, and Nagaj, Sutton, Zombory, Kilpeck, and Nicole Krakora each had a hit for the Hilltoppers, who improved to 6-3.

“It was our first home game and the place was packed,” Landies said. “This was also the first time we got to play on our new infield. It was a great atmosphere to play softball out there tonight and the sun was shining. It was really a great night.”

Toppers thrilled to take the field