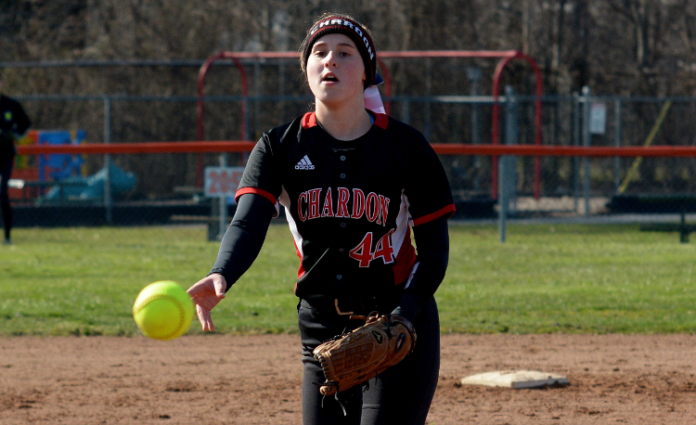 The win snapped a three-game skid for the Hilltoppers, who improved to 3-6 and won their first game in Ohio this spring.

“It was huge,” Chardon coach Stewart Landies said of the win. “We intentionally put the kids up against some really good competition to start the season. The six games in Myrtle Beach were all against very good teams and then you come home and Ursuline is ranked in the Top 10 in Division II and then South. I kept telling the kids, if you will keep the faith, this competition is going to help you. They did and they believed.”

The Hilltoppers needed that faith early on as Kayla Preziuso found her rhythm in the circle.

She walked four batters in the second inning and combined with Chardon’s only error the Lions scored two runs.

Preziuso shook off the rough inning and struck out six of the next 15 Lions she faced.

“It’s been a big help having Scott Knoerr, who is our pitching coach, in the dugout,” Landies said. “The girls trust him and what he’s saying. Kayla is coachable and she listened to what he was saying and he was spot on with what she was doing. She made the change and went back to being the dominant pitcher that she’s been.”

She also got the Chardon offense on track with her leadoff single in the bottom of the third.

Kayla Noerr followed with a single and Marisa Organiscak reached on a fielder’s choice that scored Preziuso to cut NDCL’s lead to 2-1.

Jackie Adkins followed that up with an RBI single and Organiscak scored on a groundout to give the Hilltoppers a 3-2 lead.

“The first inning, we were tentative and timid much like we were against Ursuline and South and then in the second inning, they just turned it on and said I’m done looking at pitches and started hitting the ball the way we knew they could,” Landies said.

NDCL tied it in the top of the fourth but the Hilltoppers responded with a six-running inning to pull away for good.

Madison Hauser led off the frame with a triple and she scored on Melanie Schaefer’s groundout. Preziuso then doubled and stole third and she scored on an error. Organiscak then hit a two-out single and moved to second when Adkins was hit by a pitch.

Leggett then launched a 2-1 pitch onto the hill in left field to give Chardon an 8-3 lead.

“Lexie has been hitting the tar out of the ball,” Landies said. “She crushed the ball at Ursuline, just right at people, and she crushed it last night. The home run she hit tonight, that’s about as far as I’ve seen a right-handed batter hit the ball out of the park here at Munson. She put the ball up on the hill and that’s quite a shot.”

Madison Russo then singled and scored on Adkins’ triple.

Noerr’s RBI single in the fifth put the Hilltoppers up 10-3 and Adkins singled and scored on a groundout in the bottom of the sixth to set up Hauser’s walk-off homer.

Olivia Adkins reached on a two-out error and Hauser hit the first pitch she saw over the left field fence.

“She had the only error and I know she felt terrible about it and she made up for it at the plate with a triple and a home run,” Landies said of Hauser. “The home run was a no-doubter. It was gone.”

Jackie Adkins finished the day 3-for-3 while Preziuso, Noerr, Organiscak and Hauser each collected two hits for the Hilltoppers.

Chardon travels to Brush on Friday.

Badgers rebuild with speed and depth

Hornets have big offensive night in win over Chardon