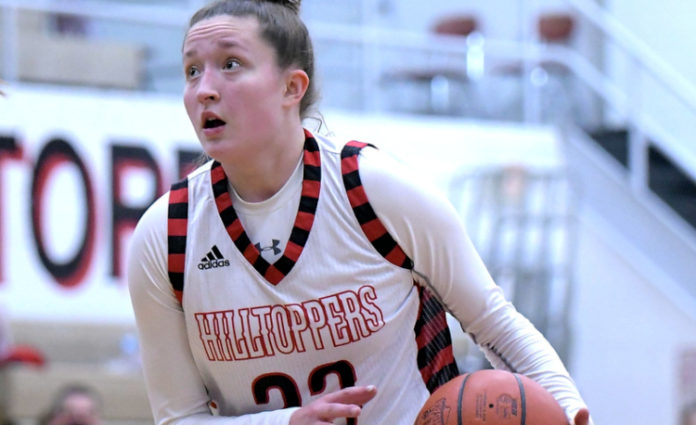 Jo Janda drained seven 3-pointers to lead Chardon to a 49-32 win over visiting North on Wednesday.

The win over the Rangers was the first for Chardon since 2017 and the first at home since the 2016 season. North had won eight straight games in the series.

“North has been the top dog for a while but we looked at it like it was any other game,” said Chardon coach Cullen Harris. “We had to focus and make sure we did our jobs. The kids executed what we wanted them to do. It was a good win–any win in our league is a good win–every team is competitive and can beat one another, so any conference win is a good win.”

After not playing to its potential in an 18-point loss at Madison on Saturday, Chardon quickly regrouped and rebounded with one of its best games of the season.

“Our kids have a very short memory–good or bad,” Harris said. “They’re going to come in tomorrow as if nothing is different and that’s a good thing sometimes. When you go down to Hoban and you take your lumps, they come back ready to get better and they don’t dwell on it. Same thing on Saturday, we got our butts kicked. They played better than us but we came back on Monday ready to play and ready to compete and we got better. Hopefully, tomorrow we can build off of today.”

Janda connected on 7-of-10 3-point tries to lead all scorers with 21 points.

“All of us were still pretty upset with the way that we played on Saturday and we all wanted to go out there and win, especially against a team we haven’t beaten in a couple of years,” Janda said. “As soon as I hit my third three in a row, I knew I was on and so did everyone else and they kept feeding me the ball.”

Janda was in eighth grade the last time the Toppers beat the Rangers.

“This was the first time I can remember that we have beaten North and the entire team was ready to go out there and win,” she said.

While Janda found her groove early, she wasn’t forcing the issue.

“She shot the ball really well,” Harris said. “They were in flow and in rhythm. A couple were off of offensive rebounds and a couple were off of our screens. She shot them with confidence but she didn’t force anything. Sometimes, kids make two or three and they try to force it and get more. She just let it come to her.”

With Janda hurting the Rangers on the offensive end, Emily Noerr locked down North standout Abby Carter, who finished with a season-low five points.

“Emily Noerr guarded Carter essentially the entire night and did a tremendous job,” Harris said. “She’s a sophomore who is starting to figure out what it really takes to compete at this level. We looked at her before the game and said, ‘Hey, you may sacrifice your offense to make sure you play great defense.’ She said, ‘OK, coach.’ It’s really cool to see those things and she still ended up getting 11 points.”

“It was a team effort all around and that’s what I keep going back to,” Harris said. “When we’re successful, we’re playing together and we have five kids carrying the weight and that’s what we had tonight.”