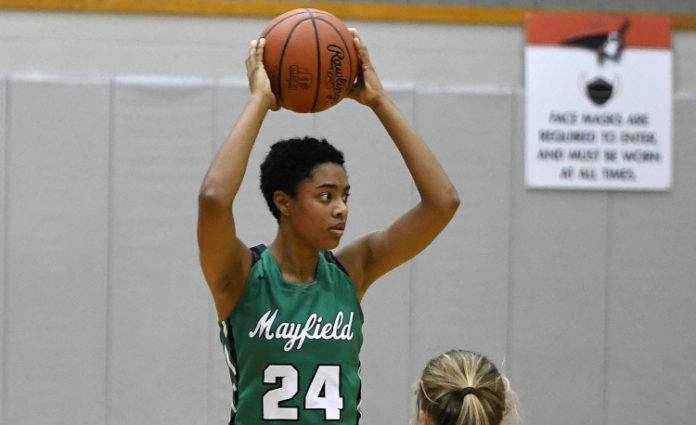 Most young basketball players dream of the heroic moment when they drain a pair of free throws with no time on the clock to lead their imaginary teams to victory.

Mayfield’s Hannah Peterson lived that moment on Monday as the Wildcats rallied for a 38-37 win at Cuyahoga Falls.

“I felt really great,” said Peterson of coming through in the clutch. “After coming off of a couple of tough conference losses, I’m really happy that I was able to come through for my team and get us this win.”

The Wildcats weren’t at their best for the first three quarters.

Cuyahoga Falls jumped out to an 18-6 first-quarter lead and held a 37-19 advantage heading into the fourth quarter.

“If you ask any one of our girls, they’ll tell you the first three and a half quarters went exactly opposite of how we hoped,” said Mayfield coach Ryan Looman. “We just weren’t very good defensively and we couldn’t put the ball in the hoop to save our lives on the other end, but something clicked in the fourth and we just buckled down.”

Uriah Jennings, who scored a game-high 15 points, sparked the Wildcats in the fourth quarter with her aggressive moves to the hoop.

Jennings’ effort inspired the Wildcats to amplify their intensity on the defensive end, which led to many transition baskets.

Trailing 37-36 with seven seconds remaining, the Wildcats drew up a play to set up Ashley Dearden for a game-winning 3-pointer.

The play worked to perfection but Dearden’s shot was just off the mark. Peterson tracked down the loose ball and was fouled on her put-back try as time expired.

As Peterson set up for her game-winning free throw attempts, she thought of teammate Gabby Moore.

“My teammate Gabby said it best, ‘It’s just practice,’” Peterson said. “Walking up to the line, I just kept my cool. I knew that I needed to make those free throws for the win, so I just took some deep breaths and put them in.”

While Jennings and Peterson, who finished with 10 points, handled most of Mayfield’s scoring, the win was the result of every Wildcat contributing in some way.

Alex Duncan and Dearden both finished with five points and Reagan Sovchen contributed with three. Olivia Nicolli didn’t score but she did limit Cuyahoga Falls’ top scorer to just two points in the final three quarters.

“Olivia Nicolli played really good defense,” Looman said. “We asked her to guard their best player the entire game and held her to two points after the first quarter. That was huge for us.”

Mayfield travels to Lakeside on Wednesday.