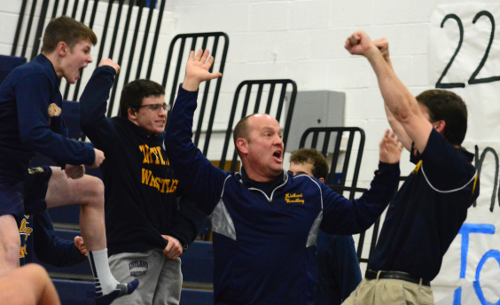 ROOTSTOWN—Most outsiders consider wrestling an individual sport and for good reason. It’s a one-on-one battle on the mat with no help available from a wrestler’s teammates.

Those who have wrestled or coach know otherwise.

“It feels great to be going down to Columbus,” said Kirtland coach Scott Francis. “Two years ago we got to that go-to match and we lost. Last year we bowed out a little earlier than we wanted too. These seniors especially have been looking forward to getting back down here and getting to this match and winning it. Coming in as underdogs makes it even more special.”

Brendan Williamson won by forfeit at 106 pounds then Mike Petterson fought off his back in a technical fall loss that saved the Hornets a team point. Blake Andonian, who appears to be double-joined in the shoulder, did the same at 126 and Mike Calvert lost 12-6 but denied the Rovers any bonus points in building a 19-6 lead over the Hornets.

“Everybody did great out there,” Francis said. “In a dual match just not getting pinned sometimes is great because you save the team a point here or there. Mike Calvert coming back for his first match did a great job in his two matches. He won the first one but then he lost to a quality kid there but was able to keep it close. Those three points were big. You start adding up those few other guys who saved us a point here or there and that was the difference in the match.”

Chris Sakenes and Clayton Davidson then recorded back-to-back pins at 152 and 160 to keep the Hornets in the match. The forfeits left Rootstown in charge, 37-24, with just three matches remaining.

Faced with a must-win situation, Anthony Porter found himself on his back at 195 pounds with Kirtland’s state tournament hopes fading with every millimeter closer his back came to the mat.

As he has done so many times before this season, Porter recovered and ended up pinning Gabe Gretz in 4 minutes, 27 seconds to pull the Hornets to within seven points with two matches to go. The Hornets had to win the remaining two matches but would need at least a major decision in one to knock off the Rovers.

Dylan Choe changed that with a pin at 220.

He controlled the first period then flattened Jimmy Goforth 33 seconds into the second.

Kirtland’s fate then rested on the back of Diemer at heavyweight.

Diemer was used to pressure, having been a part of Kirtland’s four state finalist football teams. Despite his confidence, Diemer got thrown to his back, twice, and trailed Rootstown’s Ronnie Jeffers 11-3 before ending the match, and the dual, in 3 minutes, 50 seconds.

“I just knew that if I kept pushing through I could tire him out because I like to keep in good shape and I knew if I kept going I would come out on top,” Diemer said. “I knew if I lost, it was all down to me, if I lost we don’t go, if I win we go.”

Diemer’s pin put an exclamation point on the win but the efforts of Petterson, Andonian, Calvert, and Porter to fight off their backs was just as important.

“Early in the year they probably wouldn’t have come out of there,” Francis said. “That’s something we’ve been going over in practices that when you do get caught how to come out of there. Now we’ve got to get back to how not to get into that situation in the first place.”

The Hornets defeated Girard, 41-33, in the regional semifinals. Girard was the No. 1 seed in the Region 19B bracket while Kirtland was the second seed. Rootstown was the top seed in Region 19A and the overall region.

Kirtland’s opponent in the state quarterfinals is not yet know. Click here for the state tournament bracket.