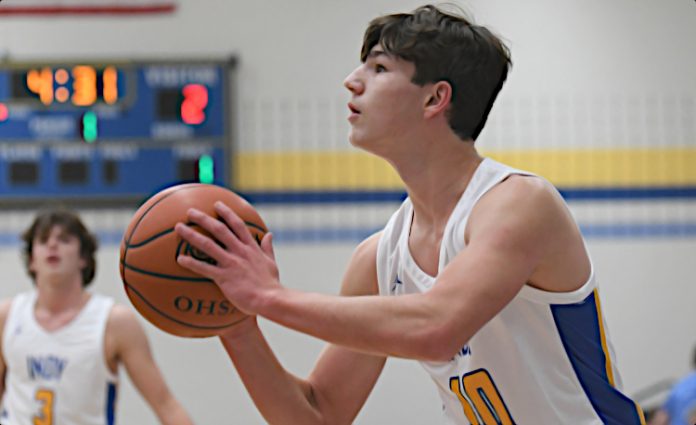 Aidan Coljohn hit a 15-foot jump shot just inside the buzzer to lead Independence to a 65-64 victory at Cardinal.

Despite playing without three starters at different points in the game, the Blue Devils rallied from a 13-point second-half deficit to claim their first win of the season.

“Having Jack Taliaferro hurt and Kyle (Zygmunt) fouling out and playing without Casey McGhee, our kids still battled.” said Independence coach Kyle Johnson. “Our guys that came off the bench gave us good minutes. Michael Tommer, Sam Crooks, and Joey Jirmasek did a really nice job coming in and filling in roles they haven’t played very often. Our kids battled and we found a way to win.”

Taliaferro suffered an injury that sidelined him for the remainder of the game and Zygmunt fouled out late in the fourth quarter.

The Blue Devils fell behind in the third quarter by as many as 13 points before stringing together several quality possessions and converting 7-of-9 free throw attempts to pull to within 49-44 heading into the fourth.

“We told the kids we wanted to be under six by the start of the fourth quarter,” Johnson said. “It was a five-point ball game and we stayed within striking distance and gave us a good shot to win the game.”

Taliaferro’s absence in the third quarter left the Blue Devils in search of an emotional leader.

“Having Jack T. out, he brings a lot of energy to our team,” Johnson said. “We have been preaching this year to get a score and then a stop. We didn’t shoot well tonight but we were able to get to the free-throw line. Kudos to Cardinal, they shot lights out and they’re a good shooting team. We missed a couple of closeout assignments and they knocked down some shots.”

Leading 65-63, Cardinal took possession after an illegal screen was called on the Blue Devils with eight seconds remaining in the game.

The Blue Devils forced a stop and took over possession under Cardinal’s basket with four seconds to go.

“We didn’t have a timeout left so we called a play and tried to get the ball to Braden Flynn under the basket,” Johnson said. “He wasn’t open so we found Aidan and he hit a 15-footer with time winding down.”

Coljohn, who finished with a team-high 18 points, never doubted the Blue Devils could pull out the win.

“My teammates and I are always going to fight to the end,” he said. “It was a great feeling seeing that shot fall after we battled all game.”

The Blue Devils overcame their early shooting struggles with effort and determination.

“Our shots just weren’t falling for us early,” Coljohn said. “We kept chopping the lead down in the second half by getting to the rim and applying good pressure on defense. This gives us great momentum going into a big week.”

Zygmunt contributed to the win with 17 points, Taliaferro added nine, and Flynn pitched in with seven. Jirmasek, Tommer, and Crooks each scored two points in the victory.A

Blue Devils own the fourth in win over Lutheran West

Kirtland depth pays off in win over Cardinal