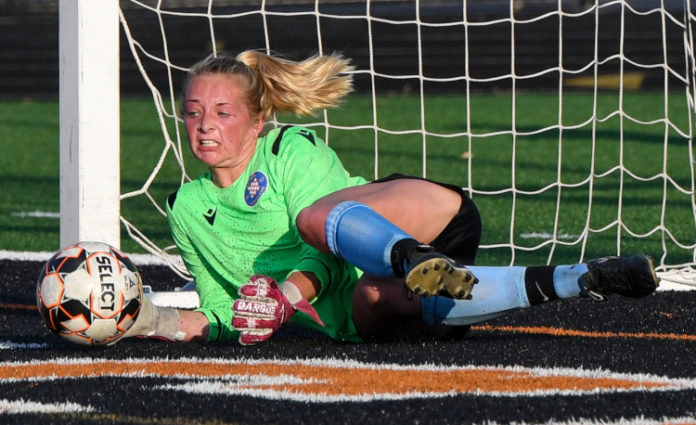 Alexandra Wright scored four goals to lead Ambassadors Cleveland to a 5-0 win over their hosts.

“We played one of the best teams, a very, very talented group,” said Croatia Juniors head coach Drago Dumbovic. “It was actually beautiful watching them play. We are building our team and I was very proud of our hard work and not giving up and competing for every ball.”

Inexperience at the WPSL level hampered Croatia Juniors’ ability to mount an attack.

“Our possession was not there and when you’re playing a team that is excellent in possession, you don’t want to give up the ball, which we did a lot and then we had a couple of breakdowns on the back that cost us a couple of goals,” Dumbovic said. “Overall, we did learn as a team what we want to reach to become to be competitive in this league.”

The Croatia Juniors opened the season on Saturday with a 3-1 road loss to the Pittsburgh Hotspurs Football Club.

They played that game without a training session.

“We didn’t even have a practice yet,” Dumbovic said. “(On Saturday), we didn’t have three starters and today we didn’t have one. We are trying to create our own identity but it’s very hard. We are trying to find out what is going to work, where is the chemistry, and what players next to each other can be very solid in helping each other. We are still searching for our own identity but we do have a really good group of girls that are working hard.”

Among Dumbovic’s challenges is identifying his side’s strengths and to do that, he has been flexible in his game-day strategies.

“So far, we’ve played two games and we’ve played four different tactical formations,” he said. “We are trying to find out how this could work for us so we’re trying different formations and putting players in different places in those formations to see what is going to work for us. Unfortunately, today we had to play against one of the best teams so it was real difficult to create our own identity against one of the best teams.”

The Croatia Juniors had a few key plays to build off.

Captain Leslie Kiesling (North Canton/Milwaukee University) was impressive in the midfield and keeper Megan Biddell (Mentor/Lake Erie College) recorded a penalty kick save in the second half.

Despite the score, the Juniors never let up.

“I’m very happy with the players’ attitude and hard work,” Dumbovic said. “Overall, it was a learning lesson for us. We’re just going to keep going and build it and we’re looking for additional players to come in and become part of our program. In this league, you do have to have the talent. You have to have it to compete.”