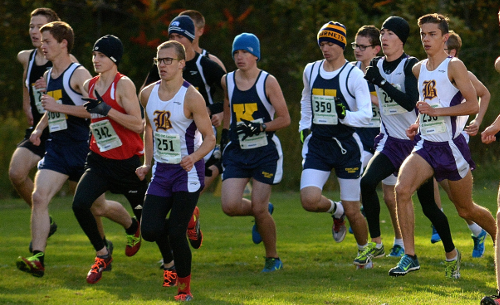 GATES MILLS—Cross country runners enjoyed unseasonably warm and dry conditions for most of the 2015 season.

That all changed on Saturday when the runners at the Chagrin Valley Conference championships at Hawken were greeted with temperatures that dipped into the high 30s and even some snow flurries.

“Everybody was faced with it but we’ve been spoiled by such a nice season all year, as far as the weather goes, and then the conference championship comes and it’s basically snowing out there,” said Kirtland coach JP Moran. “That was a little adjustment.”

The weather led to some slower times but Kirtland’s Kevin Cummings and Christine Walsh finished among the top 16 runners in their respective races to earn second team all-conference honors.

Kirtland’s boys finished in fourth place while the girls were fifth.

“Overall, the team place shook out kind of how I expected it,” Moran said. “Going in we were maybe thinking about the top three but looking at how it shook out it probably wasn’t realistic with the (conference) realignment.”

Kirtland next will compete in Saturday’s Division III district meet at the Trumbull County Fairgrounds.