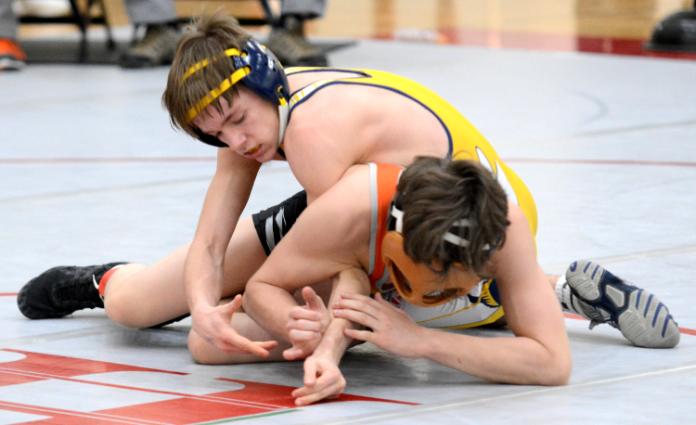 “We were hoping to win the tournament but will only improve throughout the year,” Cuyahoga Heights coach Dave Meade said.

Nine Cuyahoga Heights wrestlers earned a spot on the podium with Nolan Frye and Luke Hopkins both winning individual titles.

Frye finished pool wrestling 3-0 with three pins then flattened Rocky River’s Ian Zender in the semifinals and beat Kirtland’s Will Davidson, 15-3, in the 106-pound championship bout. Hopkins was 2-0 in pool wrestling with a pair of pins. He pinned Rocky River’s Josh Bergin in the 132-pound semifinals then beat Barberton’s Charles Westfall in the championship bout, 10-4.

“Nolan Frye and Luke Hopkins both took first place by being aggressive and attacking throughout all their matches,” Meade said. “I thought our upperclassmen did an excellent job and our younger guys won some matches and got their feet wet in a tough high school tournament.”

Kirtland’s Jeff Kusar won the 285-pound title with a 5-0 record and five pins. He pinned all four of his pool wrestling foes in 4:29 then stuck Brookside’s Tony Garza in the championship bout in 5:44.