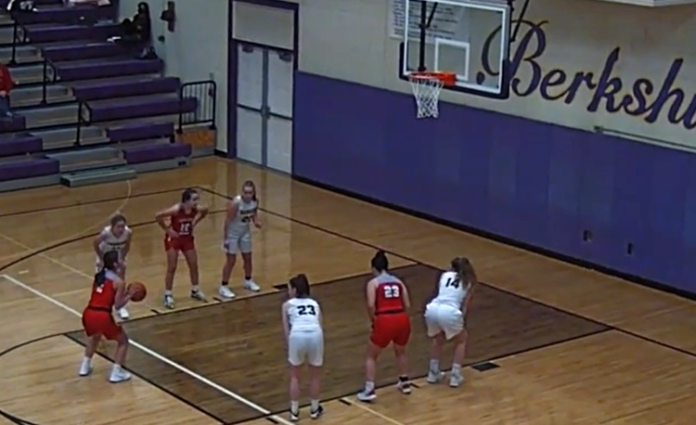 While Heights was just happy to play a game during these uncertain times, head coach Al Martin was impressed with the way his players stepped up in the season-opener.

“We were so happy just to play a game,” Martin said. “Our girls have been really excited about the season. I don’t know how many more we’re going to get to play but we were really excited and they had a lot of energy out there. Berkshire is well-coached and they’re a physical team but we were able to shoot the ball pretty well.”

Sophomore Tess Conroy wasted little time making her mark as she scored eight of her game-high 23 points in the first quarter as Heights built a 10-5 lead.

Conroy drained four 3-pointers and was 5-for-5 from the free throw line in the win.

In addition to her typical duties on the offensive end, Harris was tasked with slowing down Berkshire standout Lydia Kastor.

Mollee Chapman led the Badgers with nine points while Kastor was limited to just six.

“Julia Harris did a really good job,” Martin said. “Berkshire has that really good guard in Kastor. She’s a nice player and they run a lot of stuff with her. She’s coming off of ball screens and off the ball screens but Julia Harris, who is our best defender, did a really good job staying with her and making it tough on her to get good looks all night. She also handled the pressure. They full-court press you so she’s guarding the best scorer on the other team and then she’s also having to handle the full-court press. I thought she played really solid.”

As a team, Cuyahoga Heights converted on 10-of-15 free throws and hit on five 3-pointers. Berkshire was just 2-of-10 from the line and hit a pair of 3s.