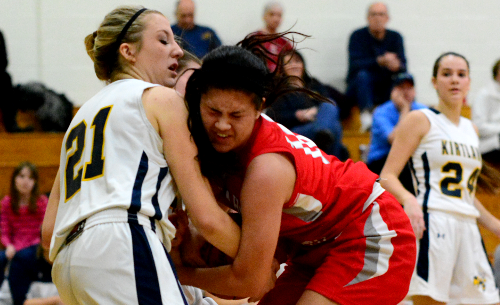 Cuyahoga Heights too much for Kirtland

Cuyahoga Heights advanced to the Division IV regional championship game last season and based on Wednesday’s 46-28 win over Kirtland the Redskins could be even better this year.

The Redskins dominated in all phases of the game and led 41-12 after three quarters before sitting their starters for the final eight minutes of play.

“They’re very well-coached, very well disciplined and they’re talented,” said Kirtland head coach Bob Bell. “That’s a hard combination to beat. They basically had their way with us. They simply were the better team tonight, no doubt about it.”

Behind Jenna Stegmaier, an all-state player and one of the Chagrin Valley Conference’s top scorers, and the red hot Ariel Rebello, the Redskins jumped out to a 16-4 first quarter lead and led 27-8 at halftime.

Meanwhile, Kirtland managed just four points in each of the first three quarters.

“The thing about that was during that period we were playing very good defense. It’s just a matter of time they’re going to get that shot they want,” Bell said. “On the offensive end, you could see so many of our shots were pressured and pressured shots aren’t as likely to go in.”

Stegmaier had nine of her game-high points in the first half and Rebello hit a pair of 3-pointers early in the game to help the Redskins pull away. She added a third early in the second half.

Freshman Sydney Snyder led Kirtland with just eight points but she competed hard and with a lot of confidence against a veteran squad.

“She’s just going to continue to grow and get better,” Bell said. “Stegmaier started as a freshman and look where she is now. If Sydney continues to progress at the rate she has progressed this season I think she has a very bright future.”

Cuyahoga Heights improved to 11-3 overall while Kirtland dropped to 8-6.

Bell believes the loss could help his team moving forward.

“I think we can learn from it,” he said. “We didn’t go in overly disappointed. Obviously it was a loss but we went in with the attitude that we’re going to learn from it and get better.”