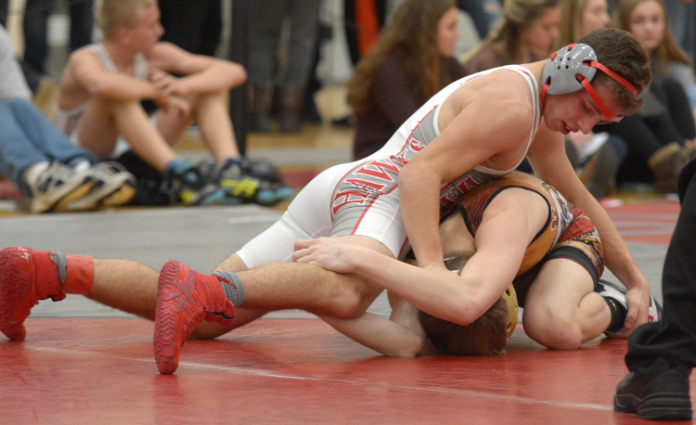 Hawken, Cuyahoga Heights and Independence all turned in strong performances at the 25-team Division III Classic at Waterloo High School over the weekend.

“Our Hawken wrestling team is off to a great start this season,” Hawken coach Bob Rodriguez said. “We only had six kids competing and only five of them scoring. The tournament is a pool-to-bracket on the second-day style and includes many state-ranked wrestlers. It really was an amazing weekend of wrestling for us. The team went 19-4 on the first day and finished with an overall record of 35-9 for the weekend.”

“William continued his strong junior season by taking the title in dominant fashion by pinning his opponent from Wellington in the second period,” Rodriguez said. “He went 6-0 with five pins on the weekend and his season record is now 19-1.”

He pinned all four of his pool wrestling opponents then wrestled his way to the championship bout where he dropped a 10-6 decision to Mogadore’s Nick Skye, a returning state qualifier.

“Alex secured the first takedown and after that, the match went back and forth until Skye got a late reversal for the win,” Rodriguez said. “Alex finished the tourney 6-1 with five pins and a major decision.”

Patrick Reineke finished third at 106 pounds, Jackson Reineke was third at 120 and Jacob Hlifka placed fourth at 113 for the Hawks.

Christian French was a non-scoring wrestler for the Hawks who narrowly missed qualifying for the gold bracket championship round with a 5-2 record. He won the silver bracket title and finished 5-2 on the weekend.

“I had a couple juniors out of the lineup this weekend that would have scored more points for us and a couple close matches we lost to eliminate some kids,” Cuyahoga Heights coach Dave Meade said. “With more practice, hard work and getting healthy, we will improve. I thought the five kids who placed did an excellent job.”

Nolan Frye finished second at 106 pounds after a 3-2 loss to Eastwood’s Gavin Owens in the championship bout. Frye finished the weekend with an 8-1 record.

Luke Hopkins, who earned his 100th career victory during Friday’s pool wrestling, Jordan Krucek and Joe Connors each finished third for the Redskins.

“Luke Hopkins wrestled up at 138 this weekend and took third,” Meade said. “He was aggressive the entire weekend and had a brilliantly wrestled 1-0 finals match. Joe Connors and Jordan Krucek both finished third and scored us a lot of bonus points with all their pins and major decisions.”

“The 120 weight class was stacked with state placers and qualifiers,” Coach Meade said. “Brandon Meade lost a couple close matches to state qualifiers and finished fifth with a major decision in the finals.”

Independence finished with four wrestlers among the top eight at their respective weight classes.

“The tournament was much deeper than in years past so the competition level was pretty high,” Independence coach Ken DeAngelis said. “We had some kids that lost tough matches and had some trouble bouncing back from those. I thought as a whole, we wrestled much more intense and physical than we did at the North Coast Classic and our dual meets last week and we’re definitely making adjustments and improvements.”

Nick Rossi finished fourth at 160 while Brian Vollman and Luke Clymer finished fifth at 182 and 220, respectively. Michael Kucera, a returning state qualifier, finished seventh at 126 after two tough decisions and a forfeit in the seventh-place match.

Vollman finished pool wrestling with a 3-0 record and three pins. He pinned two of his four gold bracket opponents to finish the weekend.

“For a kid that’s a first-year wrestler as a sophomore, he did a great job,” DeAngelis said of Vollman. “He’s picking up more and more every day. (Former Independence wrestler) Nick Mroczynski was home on break last weekend and I had him working with Brian on some under hooks. He went out and used them and did a good job to take fifth place.”