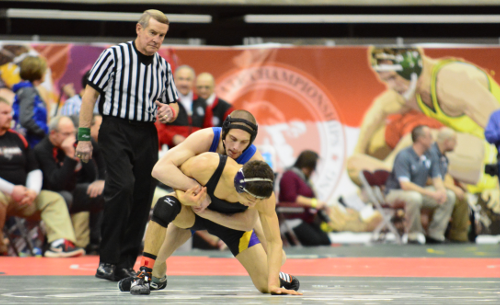 Kirtland’s Clayton Davidson and Independence’s Jacob Spino and Paul Deely rebounded from first round losses to make it to Day 2 of the tournament.

Davidson dropped a 3-2 decision to Tontogany Otsego’s Riley Tercha in the first round at 160 then West Jefferson’s Josh Doherty, 7-5, to keep his placement dream alive. He’ll wrestle the loser of the quarterfinal bout between Dayton Christian’s Andrew Hoskins and Pemberville Eastwood’s Andrew Caris.

Spino lost to Mechanicsburg’s Joe Zeigler, 3-1, in the first round at 145 then bounced back with a 7-3 win over Nelsonville-York’s Tyler Speelman in the first round of consolation wrestling. He’ll put his all-Ohio hopes on the line against the loser of the quarterfinals bout between Dayton Christian’s Logan Lacure and Huron’s Tommy King.

West Lafayette Ridgewood’s Kelly Barthalow caught Deely in a headlock in the first round but the Independence senior outlasted Bloomdale Elmwood’s Jack Hagemeyer, 7-3, in a consolation bout to advance to Friday’s consolation second round where he’ll face the loser of the quarterfinal bout between Wellsville’s Seth Bloor and Hamler Patrick Henry’s Brandon Bennett.

Other local wrestlers still alive in Division III include Hawken’s Louis DeMarco, who will wrestle Haviland Wayne Trace’s George Clemens in a 120-pound quarterfinal bout after a 6-4 sudden victory in the first round, and Cuyahoga Heights’ Trey Combs, who dropped his first round bout at 126 then rebounded with a 10-3 win in the first round of consolation wrestling.

Cardinal’s Trent Mast (113), Villa Angela-St. Joseph’s Joey Tromba (132) and Kirtland’s Evan Francis (138) all lost their first two matches on Thursday to bow out of the tournament.