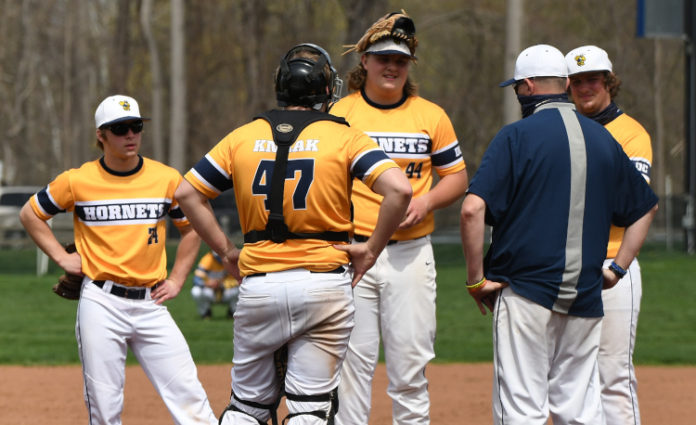 Danny Davidson hit two doubles and his first career home run in leading Kirtland to a 12-6 win at Edgewood on Wednesday.

With the win, the Hornets won their 15th game of the season and improved to 10-0 in Chagrin Valley Conference Valley Division play with two games remaining.

“The bats were great today,” said Kirtland coach Luke Smrdel. “We didn’t play the greatest defense, we need to clean that up for sure, but this is a big win for us to move to 10-0 in the conference and for seeding in the district. We’re 15-6, so hopefully, we get a good seed in the district.”

Kirtland’s defense committed five errors in the win but the Hornets were solid at the plate to offset those miscues.

Led by Reece VanArnhem with four, Kirtland pounded out 12 hits in the game.

None were bigger than Davidson’s.

“It always feels great to help out my team, both at the plate and in the field,” Davidson said. “We come into every game with a winning mentality, but in conference games it seems as if we turn it up a notch to the point where we feel that losing isn’t possible. To be able to contribute to do that makes me feel confident in myself as well as the team as a whole.”

Davidson hit a two-RBI double in Kirtland’s six-run second and he hit a two-run homer in the fifth that pushed the Hornet lead to 8-1.

“I had Mason on second base and I was looking to shoot one in the gap,” Davidson said. “When the pitch approached the plate, I read fastball on the inside corner. I turned on it and I felt a pop off the bat I wasn’t familiar with. At first, I thought it was a deep fly out to the left fielder, but the ball kept going and the left fielder turned his back. I instantly thought triple until I saw it fly over the left-field fence and I got the feeling of a home run, which I’ve never had before in a baseball game.”

Davidson closed out his three-hit day with a double in the sixth.

“My mindset today was the same as it is every game, which is to never go down on strikes,” he said. “I always want to put the ball in play to advance runners and help my team in any way possible. Striking out only brings the team down, so it’s always been part of my mindset to stay away from doing so.”

Andrew Spencer improved to 3-1 on the mound after throwing three scoreless innings and fanning six. Mason Rus allowed five unearned runs on three hits and he struck out two in 1 2/3 innings of work. Aaron Fortuna threw the final 2 1/3 innings. He allowed one run on five hits with one strikeout.

Kirtland can win a share of the Valley Division with a Berkshire loss to Cardinal on Thursday or win it outright with a win over the Badgers on Monday or Tuesday.