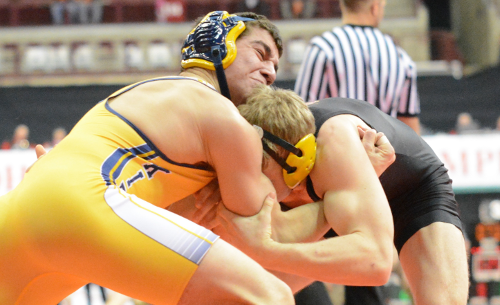 GARFIELD HEIGHTS—The most important thing Kirtland’s Clayton Davidson learned from his experience at the state tournament last season is that it’s not wise to head to Columbus as a No. 4 seed.

Last year, Davidson placed fourth at the Division III district tournament at Garfield Heights then was pinned in the first round by Dayton Christian’s Jacob Danishek, who went on to win a fourth straight state championship.

On Saturday, he won the 160 pound district title to earn a No. 1 seed in Columbus next weekend.

“I know for sure you don’t want to be a No. 4 now,” he said. “It’s a lot better coming in a one but there’s still going to be good matches and I still have to be ready to wrestle.”

Davidson, who improved to 45-0 with his 9-2 win over Rootstown’s Luke Sorboro, will wrestle Tontogany Otsego senior Riley Tercha, who is 34-6 on the year. Davidson is ranked by InterMat Wrestling as the No. 8 wrestler at 160 pounds in Division III while Tercha is No. 11.

While Davidson’s district finals win over Sorboro resulted in a district championship it was his 9-2 semifinals win over Waynedale’s Kyle Ice that boosted his confidence. Davidson entered the match ranked eighth in Division III while Ice was No. 9.

“I think it helped a lot,” Davidson said. “I’ve had a few good, close matches against quality guys this year but not compared to the amount you see at districts. Winning that one was big.”

Now Davidson has to deal with the pressure of being the only undefeated wrestler in his weight class at the state tournament.

“It builds up a little bit. You start to get butterflies before matches, but it’s all good,” he said. “I just have to wrestle my best every match and place high on that podium.”

Hawken’s Louis DeMarco dropped a sudden victory decision to Smithville’s Riley Smucker, who spun around DeMarco for a takedown to clinch his 4-2 win, to finish second at 120 pounds. DeMarco, who is ranked ninth at 120 pounds after placing eighth in the state tournament last season, takes his 40-2 record back to Columbus. He’ll wrestle Sandusky St. Mary Central Catholic senior Alex Smith (17-2), who is ranked fourth.

Independence senior Paul Deely also will head to Columbus as a No. 2 seed after he fell to Wellsville’s Seth Bloor, 6-2, in the 285 pound championship bout. Deely, who is 36-8 and making his second trip to Columbus, was paired up with West Lafayette Ridgewood senior Kelly Barthalow, who is 46-5. Deely is ranked fifth while Barthalow is 10th.

Mast, who improved to 35-6 with his 4-3 win over Wellington’s Nick Amspaugh, will wrestle Columbus Bishop Hartley senior Kristopher Hill in the first round. Hill, ranked second in the state, is 46-5. Tromba, who beat Chippewa’s Garrett Hall 2-0 for third place, improved to 39-9 this season. Ranked eighth in the state, Tromba will wrestle Genoa Area senior Devon Cannon (35-4) in the first round. Spino, who is ranked ninth in the state, will make his second straight trip to Columbus after beating Mogadore’s Josh Tompkins, 4-3, in the district third place match. He’ll put his 35-6 record up against Mechanicsburg senior Joe Ziegler (39-10), who is ranked fourth in Division III.

Kirtland senior Evan Francis placed fourth at 138 pounds and will make a third trip to Columbus. Francis, who is 41-8, will wrestle Dayton Christian freshman David Carr (56-2) in the first round. Carr is the top-ranked wrestler in Division III at 138 pounds while Francis is No. 12.