Dedic gets Rangers back on track 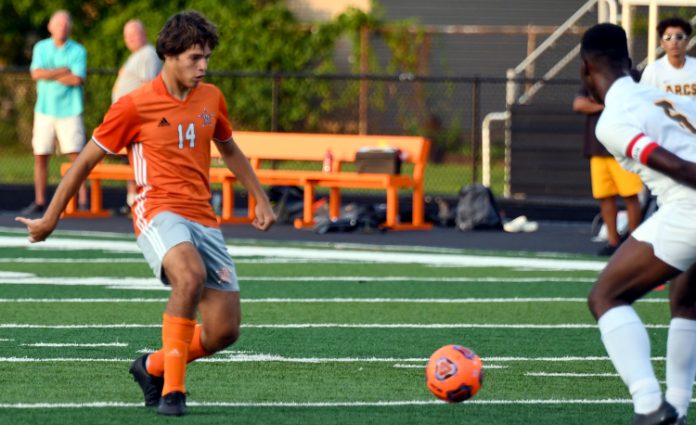 Strongsville snapped North’s five-game winning streak on Saturday but Luka Dedic got the Rangers back on track with a 4-0 win at Madison on Tuesday.

Dedic scored two first-half goals and added a third in the second half to help the Rangers bounce back and improve to 7-5 overall and 5-0 in the Western Reserve Conference.

“It was kind of an ugly game for us, we just didn’t flow,” said North coach Steve Misick. “Actually, Madison was the better team today and I think they’re going to be a pretty good team in the next few years. We were just opportunistic tonight.”

Francesco Gjinplaku assisted on Dedic’s first goal and his second came off of a corner kick that gave the Rangers a 2-0 lead.

“My first goal was set up by Francesco with a great long ball to set me up for a 1v1,” Dedic said. “My second one was off a corner with many bodies there. I just had to get enough on the ball to put it in the back of the net. My third goal was created by Dominic with his shot being deflected and setting me up for an easy finish.”

The Rangers were focused on bouncing back from the 3-1 loss to Strongsville on Saturday.

“Strongsville is probably the best team we’ve played to date and we were somewhat at full strength,” Misick said. “We were missing Colin Perchinske, he won’t be back until next year, but other than that, it’s nice to have everybody else available. Strongsville is just solid at every position and they have guys coming off the bench that are just as good. We’re pretty solid through six or seven positions and then there’s a drop-off. That’s the usual team at Eastlake North. We learned a lot and got a good evaluation of our guys.”

North pulled out the win over the Blue Streaks but Misick knows his team will have to be much sharper in Thursday’s non-conference game against Mentor.

“We just didn’t play very smart, in my opinion, but we still got the job done,” he said. “The sign of a good team is you can win when you’re playing poorly.”

Dedic is confident he and his teammates will be ready for the Cardinals.

“Of course we’re ready for Thursday,” he said. “We take it game by game and we definitely have all our sights set on Mentor.”