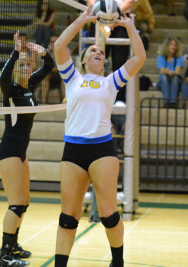 Independence head coach Megan Osysko continues to raise the bar for her volleyball team that advanced to the Division III regional semifinals last year. After beating Aurora, 3-0, in the season opener on Tuesday, the next rung on the Blue Devils’ ladder of success was a nonconference game against Magnificat, a Division I district finalist last season, on Thursday.

“That’s absolutely a nice win for the program,” Osysko said. “It was neck-and-neck, cutthroat. It was one of the slowest matches. It was going back and forth. That’s a step in the right direction. We’re proving we can compete with these teams.”

Independence nearly pulled out the first set but couldn’t put the match away, despite having game point.

The Blue Devils rebounded with a convincing win in the second set.

“We were way more aggressive,” Osysko said. “We served aggressive and attacked them. The only time they scored points is when we were giving them easy balls over the net to come back with. We used our middles more; they were part of our offense. Things were clicking.”

Magnificat went up 2-1 after the third set but Independence never flinched.

With their backs against the wall, the Blue Devils rallied to tie the match and fourth a fifth set.

“The third set was still a competitive game, we just allowed them to control the ball,” Osysko said. “The fourth set was a big one. We went back at them and played our game again. That was pretty much neck and neck up until we got to 20.”

The teams traded points in the fifth set until Independence made a run to take control of the match.

Megan Screptock was at her best as she finished the match with 23 kills and 17 digs.

“She was just part of our defense,” Osysko said. “The whole entire team played amazing. Anything given to her she was going high, putting the ball down and going outside and getting a big approach. That was probably one of the best matches I’ve ever seen her play. She also kept great leadership on the court in a very intense match.”

Hallie Zumack led the team with 48 assists and Emily Magas and Maura Collins both had 11 digs and 13 and 10 kills, respectively.

Mallory Trombetta pitched in with 16 digs.

“We had four girls in double digits digging balls,” Osysko said. “That’s awesome. The defense kept the ball off the floor.”

Things don’t get any easier for the Blue Devils, who travel to rival Cuyahoga Heights on Tuesday.