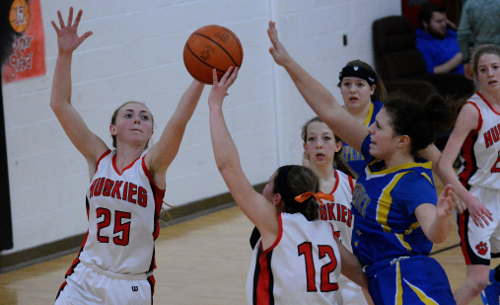 MIDDLEFIELD—Hallie Zumack scored a game-high 15 points and Megan Kuczmarski pitched in with 14 to lead Independence to a 47-27 win at Cardinal on Saturday.

As good as Independence’s offense was, it was the defense that really made the difference as the Huskies struggled to get good looks at the basket.

“We preach and pride ourselves defensively that it will turn into offense if we play solid down there,” said Independence coach Mike Marcinko. “We’ve really tried to harp on it recently just because you’re missing Julia (Riley), missing a starter, so you’ve got to band together. You band together on effort. We’re trying to play good defense and trying to work on boxing out. We focused primarily defensively for two days and then just worked off our scouting report offensively.”

With the win, the Blue Devils snapped a three-game losing streak and improved to 8-7 overall and 5-4 in the Chagrin Valley Conference.

“We needed it, there’s no doubt about it,” Marcinko said of the win. “We didn’t talk about it as a group but everybody looks around the room and knows what your record is over the last week or two. It’s a huge way to release some pressure and take a breath. It’s always more fun and more enjoyable when you’re winning. Fortunately we’ve been winning more than we’re losing but when you get a stretch like that you start to overthink it. I said just go back to effort and urgency and good things will happen and today that’s what happened.”

Zumack, who leads the Blue Devils in scoring with 12.6 points per game, shined on both ends of the floor.

“Hallie is going to fly around the gym all the time,” Marcinko said. “It doesn’t matter, the game could be at 3:00 in the morning and she’s going to make plays and play hard. I put more demands on her because we’re missing a starter so she has a little more ball handling demands at times. We’re trying to run stuff for her and we’re trying to make sure she X number of shots per game for us to be successful but she’s also not selfish. If she sees people open she’s going to get it where it needs to go.”

Cardinal trailed just 10-6 at halftime but was outscored, 13-4, in the second quarter as the Independence defense swarmed the Huskies’ ball handlers.

Cardinal dropped to 6-9 overall and 2-7 in league play.

“We knew we’d have to play about our best game of the year to get a win over Independence tonight and we just didn’t play for 32 minutes the way we had to play to win,” Kruse said. “We had a nice stretch in the third quarter to close the gap a little bit and I was hoping that was our chance to even it up but it just didn’t happen for us tonight.”