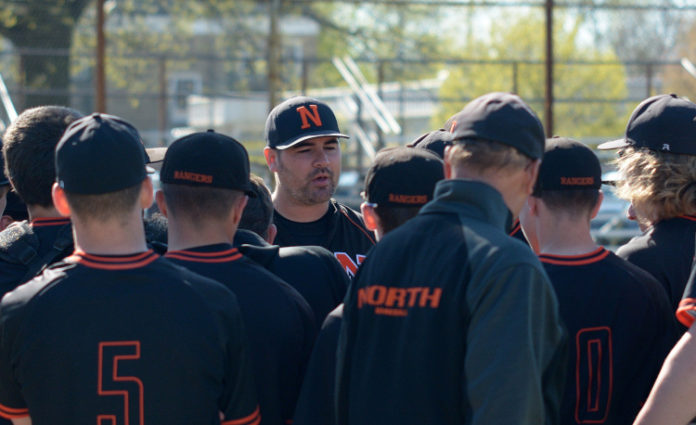 A clutch defensive play sparked the North offense in a 6-0 win over Villa Angela-St. Joseph at League Park on Wednesday.

The host Vikings had two runners on with no outs in the fifth inning but the Rangers turned a double play and added three insurance runs in the sixth to seal their fourth straight win to start the 2021 season.

“They had two guys in with nobody out so we brought Brody Spock in and we ended up getting a double play,” said North coach Kyle Stahlberg. “You could feel it in the air just that momentum shift for us and it went right into the next inning.”

North, who led 3-0 at the time, scored those three insurance runs all with two outs.

John Lanning hit a one-out single and Joey Skolny and John Keough walked to load the bases. Trent Bucy then hit into a fielder’s choice with the Vikings throwing out the lead runner at the plate. Matt Barner walked in one run and then Devo Britsky singled to score two more.

“We executed some plays that we’ve been practicing and they worked out perfectly,” Stahlberg said of the big inning. “We ended up getting some insurance there. It really came down to some momentum and the guys executing what we’ve been working on.”

North scored two runs in the top of the first when Lanning and Keough both reached on an error and Barner hit an RBI triple.

The Rangers made it 3-0 in the second when C.J. Newman led off with a triple and Chris Molica singled him home.

Bo Vinson started the game for the Rangers and picked up the win after allowing just one hit and four walks with three strikeouts in four innings of work.

Spock pitched the final three scoreless innings. He allowed one hit and struck out four, including all three batters he faced in the bottom of the seventh.

Britsky and Barner both finished the game with two hits for the Rangers.

“He hit some ropes,” Stahlberg said of Britsky. “At League Park, you really have to get it out there. One of his outs maybe had a chance at some normal high school fields. He swung it well yesterday. Barner and Newman each hit really well too. They both had a triple.”

With the win, the Rangers improved to 4-0 on the year.

“It feels really, really good,” Stahlberg said. “Our guys are really excited about it. The first two wins of the season were a dogfight so we were happy to come out with those.”