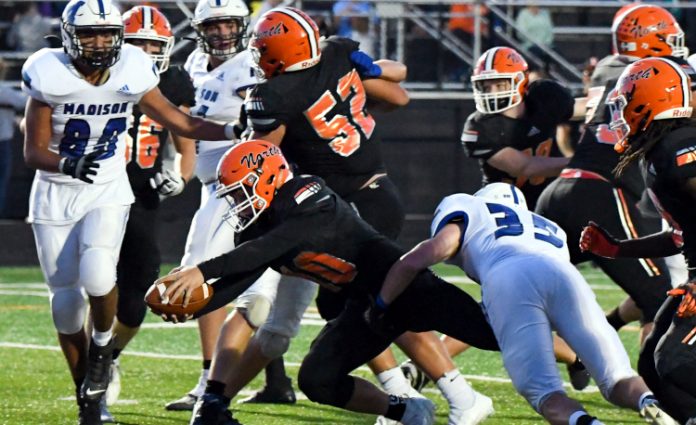 The Rangers picked off three passes and recovered a fumble in the win.

“Those guys were outstanding tonight,” said North coach Shawn Dodd of his defense. “After that first drive, I was really nervous because we were short-handed tonight. We were missing four or five guys so a lot of guys saw their first action tonight. I was really proud of those guys. They really stepped up.”

North’s Reon’tae Lowery opened the game with a 61-yard run that would have set the Rangers up inside the Madison 20 on their opening drive, but a penalty erased that explosive play and North ended up punting the ball to the Blue Streaks.

Madison took a 7-0 lead on a 75-yard drive capped by a two-yard touchdown run with just over two minutes remaining in the first quarter.

The Blue Streaks then recovered an apparent onside kick attempt near midfield but that drive was thwarted by the first of two Lorenzo Casanova interceptions inside the red zone.

That turnover sparked the Rangers, who went on to score 28 unanswered points.

“It was nice to get back on the right side of things and get back to even and kind of settle in,” Dodd said. “It’s been kind of our thing all year, shooting ourselves in the foot. Not to take anything away from the teams we’ve played, we’ve played some pretty good football teams that took it to us, but we kind of helped that too.”

Anthony Gallo tied the game on a two-yard run early in the second quarter. Gallo went on to score two rushing touchdowns and he threw for another score in his first action at quarterback.

After the North defense held on a 4th-and-7 inside Ranger territory, Curtis Thomas broke a few tackles, spun out of another, and raced 16 yards for a 14-7 North lead with 1:34 left in the half.

Mo Morgan picked off a pass early in the third to set the Rangers up with the ball at the Madison 32. Gallo converted that turnover into a touchdown when he connected with Thomas on a 27-yard touchdown pass.

North then recovered a fumble at its own 16 but Madison took the ball right back at the North 39.

North’s defense held and Gallo closed out the scoring with a nine-yard run midway through the fourth quarter.

Gallo and Zach Rummel alternated at quarterback in the first half but Gallo recorded most of the second-half snaps.

“He’s been our starting linebacker all year,” Dodd said of Gallo. “We knew coming in, we kind of prepped him, but we didn’t tell the kids until today that we were actually going to do that. We were going to rotate the quarterbacks a little bit more in the second half; we just didn’t get many opportunities to do that. We didn’t have many possessions in the second half. Anthony Gallo ran really well and that was part of our game plan tonight. He’s just a bigger, thicker senior kid that we thought we could do some things on the perimeter running him on some outside zone stuff and that was really effective for us.”

With the win, North improved to 3-3 on the year. The Rangers host Riverside on Friday.