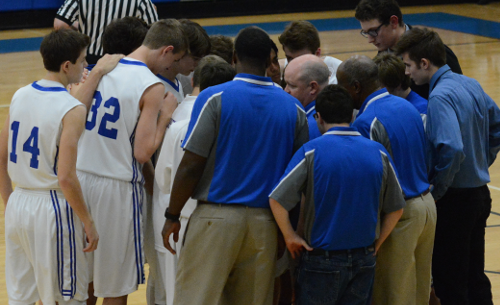 Kyle Stefanski scored a game-high 22 points but it was Independence’s defense that had the greatest impact in Tuesday’s 58-47 win over Fairport Harding.

Alec Jendre contributed with 11 points and Mario Figliola added 10 for the Blue Devils in the win.

Stefanski scored 13 of his points in the third quarter when the Blue Devils turned a one point lead into a rout.

“Our third quarter, where we scored 26 points, we played probably our best basketball of the season,” McMahon said.

That started with Stefanski hitting many of the shots he missed in the first half.

“He had some good shots that didn’t fall in the first half,” McMahon said. “We tried to impress on Kyle, even though he’s a sophomore, he’s a leader on the team, and he’s just got to keep taking those shots in order for our offense to click. He stepped up. We ran some nice stuff for him but he also created his shots at time.”

Jendre, who was limited by an injury early in the season, also rose to the challenge.

Figliola continues to make strides this season and he is closer than ever to reaching his full potential.

“Mario had a solid game,” McMahon said. “He’s still got a couple things, some small glitches that if he corrects he can have some really good games for us. He’s a hard worker and I think he’ll get it done.”