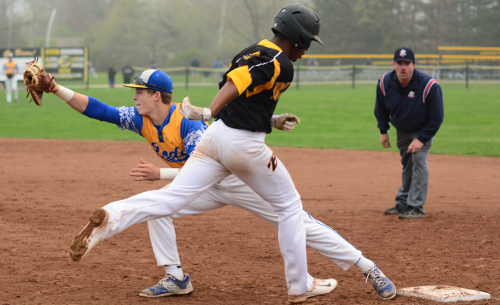 Independence likely will look at its 10-6 loss at Beachwood on Tuesday as a win that got away.

The Blue Devils and Bison were tied 3-3 heading into the bottom of the fifth inning when Independence’s defensive miscues led to seven Beachwood runs in the final two Bison at bats.

“We just mentally lost track of what we were supposed to do,” said Independence coach Mike Gruber. “We didn’t make the simple routine plays that have to be made to win ball games.”

Tyler Wilson had allowed just three hits through 4 2/3 innings when things took a turn for the worst for the Blue Devils.

Beachwood’s Josh Bialosky hit a pop up at home plate that landed in fair territory for a two-out single. He went on to score on an overthrow at third base. Ben Connor also scored an unearned run in the inning to make it 5-3.

In the bottom of the sixth, Aiden Stern reached on an error and after Wilson got the next two outs Shawn May and Max Balazs hit back-to-back singles to make it 7-3. Two more errors and a double increased Beachwood’ lead to 10-3.

The Blue Devils scored three runs, all with two outs, to pull to within 10-6 but that’s as close as they would get as Pasquale Monteleone’s line drive to left with two runners on base ended the game.

Led by Austin Buc, who was 3-for-4 with a double, the Blue Devils outhit the Bison, 10-8. James Schmetzer and Jake Watroba both had two hits for Independence.

“Offensively, we really put the ball in play today and started to make things happen,” Gruber said. “I was happy to see them come out in the seventh inning after our bad inning on the defensive side go out and hit the ball to give ourselves the chance to come back and win the ball game.”

“The last two days we’ve had great pitching,” Gruber said. “Both our starters came out and threw the ball well and did what they needed to do to get the win. Today our defense just didn’t do what we had to do to get out and cut back on the runs.”