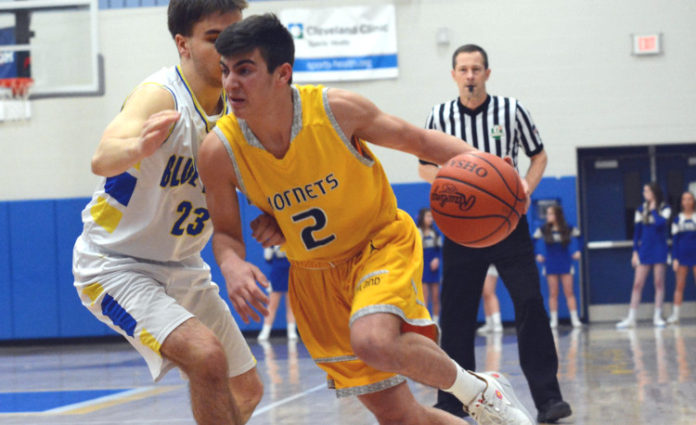 Thanks to its football team’s success, Kirtland’s boys’ basketball team has grown accustomed to getting a late start to the season.

This year, the Hornets aren’t alone as COVID has left many area teams sidelined until further notice.

Not that the Hornets needed the help—they finished 17-7 last season and return three starters from that squad—but they’ll take it as they settle in and prepare to tip-off the season.

“I feel very good about the team we have returning this year,” said third-year head coach Shawn McGregor. “Our seniors do a great job of leading by example and help to create a competitive atmosphere every day. We have the potential to be very good if we continue to work hard and accomplish our defensive goals.”

Kirtland’s lineup includes seven seniors and a host of others with varsity experience.

Even more important, the Hornets benefit from the culture of success the school and community have developed over the past decade.

While there will be several new faces in the lineup and many others playing new positions, McGregor is confident in this swarm of Hornets.

“We are a very competitive group that loves to play hard,” he said. “We should be able to force teams into some uncomfortable situations with our defense and hopefully translate that into some easy scoring opportunities. We will have some guys stepping into some new roles for us this year on the offensive end, so some growing pains are expected while they settle in. That being said, they compete so hard on such a consistent basis that scoring opportunities will come.”

“Joey is an incredibly talented player that does everything very well,” McGregor said. “He makes those around him better, and we will rely on him a great deal this year.”

DeMarco, a 6-foot small forward, averaged 6.2 points and 7.8 rebounds per game. He was named second-team All-CVC and honorable mention all-district. He pulled down 20 rebounds in one game as a junior.

“He has a nonstop motor that defensively can defend (all five positions),” McGregor said. “He is a strong athlete with a much improved offensive game.”

“T.J. is a big man with good feet in the post and the ability to knock down jumpers,” McGregor said.

Juniors Hector Lescano, a 5-foot-11 shooting guard, and Gage Sullivan, a 6-foot-4 power forward, round out the projected starting lineup.

Sullivan averaged 5.8 points and 5.2 rebounds per game as a sophomore. He recorded three double-doubles last season.

“Hector is a great defensive player with a fantastic offensive game,” McGregor said. “The sky is the limit with Gage’s potential on both ends of the floor.”

Sullivan is a 6-foot small forward and Powers is a 5-foot-11 shooting guard. Both are returning to the court after a year away from the game.

Mancini is a 6-foot-3 power forward with a solid all-around game and Jackson is a 6-foot-1 center.

“If we can defend and utilize our depth and athleticism we have the potential to be a very good team,” McGregor said. “We have great kids that work hard and care about each other. It’s a joy to be around these guys and I look forward to spending as much time with them as possible.”