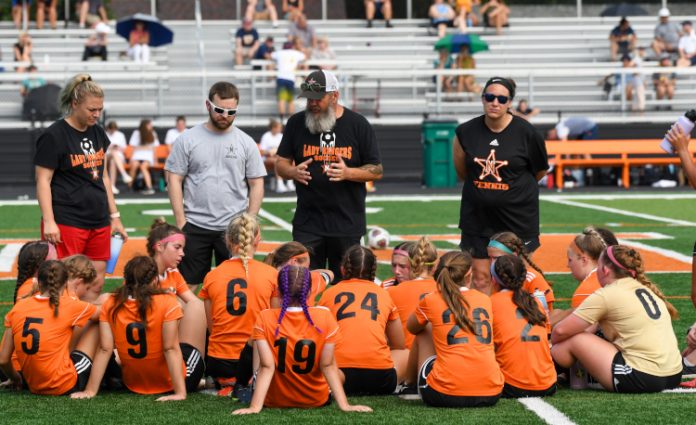 Sally Dempsey scored a pair of goals to lead the North Rangers to a 2-0 non-conference win over visiting Normandy on Saturday.

The victory was the first of the season for the Rangers.

“Having this first win felt great for both the entire team and myself,” Dempsey said. “We are all working hard to have many wins this year and having the game result in a shutout made this first victory so much better. Today proved to all of us what we are capable of as a team and we are hoping for more great games like this one.”

While Dempsey recorded the finishes, the Rangers as a whole were effective in maintaining possession and creating scoring opportunities.

“Our success today is largely due to our possession during the game,” Dempsey said. “We effectively moved the ball how we intended to, giving us many more opportunities on goal. The whole team was playing so composed the whole time, which allowed us all to stick to our system and play our game. We had each other’s back the whole time.”

Brennan Herbert assisted on both of Dempsey’s goals.

“Both of the goals I scored would not have been possible without the great assists I got from my teammates,” Dempsey said. “Once I received the ball from them, it was just a matter of aiming away from the goalie and getting the ball in the net.”

With the win, the Rangers improved to 1-2 on the year.

“We need to keep up the hard work at practice and continue to strive to improve,” Dempsey said. “This game proved to us all that we have so much potential; now it’s up to us to utilize it and win some more games.”

Rangers break through for first win